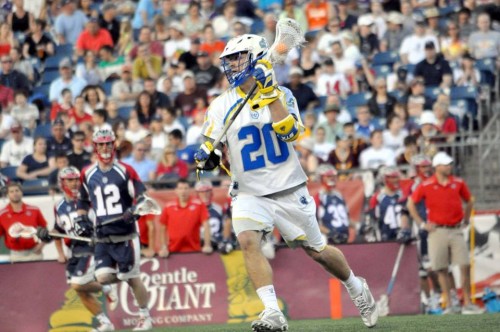 The end of any regular season often brings multiple emotions of excitement, anticipation, disappointment and questioning.  The top four teams see the fruits of their success as they move on to the playoffs and the other teams look back to see where they went off the track in their quest for the Steinfeld Cup.  As fans we are excited for the playoffs, but find ourselves wondering where the season went.  All of these season-ending scenarios played out and then the other cleat dropped.  Dave Cottle and Jesse Schwartzman both announced they were stepping down and retiring.  Two pillars of the MLL will no longer be patrolling the sidelines for the Bayhawks or manning the pipes for the Outlaws.  The end of the regular season finally set the stage for the playoffs as we bid goodbye to Coach Cottle and Jesse Schwartzman.

Denver sent Schwartzman out in style with a 15-14 come from behind overtime win over the first place New York Lizards.  The Lizards sought to get back to their winning ways in the season finale and looked to be on track to accomplish it.  New York was up 11-6 at halftime on the Outlaws and the third quarter saw each team only score one goal apiece.  Denver then picked up the offensive pace and scored seven fourth quarter goals to send the game to overtime.  New York only scored two goals in the fourth and committed an unsportsmanlike conduct personal foul that sealed Denver’s comeback.  John Grant Jr. scored the tying goal and Drew Snider scored the game winner.  Despite the early offensive success, New York failed to outscore Denver in the fourth and split the battle at the X between Greg Gurenlian and Brent Hiken.  New York found success on its only man up opportunity, but penalties resulted in three Denver goals.

Denver bids a sorrowful farewell to Schwartzman while New York gears up to face a gritty Boston squad looking to rebound from a close loss to Ohio  and avenge a season sweep by the Lizards.  Boston’s man up and man down teams are among the best in the league while New York struggles in both areas.  The Lizards gave up the most two-point goals in the 2015 regular season while the Cannons scored the most two point goals.  The Cannons will most likely run both Craig Bunker and Joe Nardella at the Beast to try and curb his dominance at the X and keep the ball from the Lizard’s offense.

Boston and Ohio met for the second time in two weeks with a first round playoff home game on the line.  This game fell into the instant classic category and needs more attention from national sports media.  For Ohio, it was simple. Win and host a playoff game while Boston needed to beat Ohio and have Florida beat Rochester.  Where the New York versus Denver game was a come from behind victory, Boston and Ohio traded leads multiple times, was tied at halftime, the end of the third quarter, and the game came down to the last second.  Home field advantage was on the line and both teams played like it.  Cannons rookie John Glesener had a night to remember with two two-point goals and eight points for the night.  Recently activated Joe Nardella went 21-35 at the X and cooled Greg Puskuldjian’s hot streak.  Boston’s man up team could not match Nardella and Glesener’s success on the night as they went an uncharacteristic 1-7 and left many opportunities on the field.  Ohio welcomed back Dana Wilbur back to the lineup and the defense continued the aggressive play from last week’s New York game.  Both goalies made incredible saves and kept their teams in the game.  Brian Phipps had 15 saves for Ohio while Adam Ghitelman made 19.  Both teams showed that they were ready for the playoffs and their opponents need to bring their best effort if they expect to defeat the Cannons or Machine next week.

Rochester traveled down to Boca Raton to take on the Florida Launch with Casey Powell possibly announcing his retirement.  The Launch rallied behind Powell and defeated the Rattlers 18-11.  Florida was led by Kieran McArdle’s 4 goals and three assists, Lyle Thompson’s three goals and three assists.  The Launch defense was highlighted by Tucker Durkin’s performance against Jordan Wolf and holding the all star to one goal and two assists.  Austin Kaut made 11 saves and Brett Queener had nine against the Rattler offense while splitting time in the cage.  Chris Mattes and Tom Croonquist won the face off battle going a combined 18-32 from the X.  The game was close at first with Rochester taking a one goal lead at the end of the first quarter and Florida leading by three at halftime.  The second half saw Rochester only score four goals, two in each quarter.

Powell announced that he was heading up The World Lacrosse Foundation to spread the sport he loves on an international level.  Perhaps it was just me, but I got the sense that Powell may not be stepping away from the game yet.  Many fans and players were chanting “one more year,” and that as well as the Launch’s performance may have swayed the legend to stay.  Florida has the foundation for a playoff team next season and needs some minor tweaks to get to the next level.  Rochester finished with a loss and has to travel to Ohio and take on a Machine squad that is on a roll and coming off of an impressive win over the Cannons.  The Rattlers did not do themselves any favor by not securing home field, but if anyone has the ability to beat the Machine, Coach Soudan and company are certainly capable.  Get ready for a war in Ohio.

In a very emotional game, the Bayhawks hosted the Hounds as Dave Cottle announced he was stepping down as head coach.  The main man for Chesapeake will be moving into a front office role and his team sent him out on a win.  Ever the coach, Cottle refused to talk about his retirement and stated his team needed to play smarter lacrosse to get the win.  Cottle has been one of my favorite coaches in the MLL and seeing him step away from the sidelines was difficult, especially since so many players hold him in such high regard.  I have interacted with Coach Cottle on social media and he does posses a good sense of humor and sharp wit and enjoys being sent turtle pictures on Twitter.  You were a pleasure to cover, Coach.  Only during football season are we on opposite sides as he is an Alabama football fan.

One of the MLL’s favorite players returned as Charlotte welcomed Lieutenant Garrett Thul to the lineup.  Thulkamania ran wild as Thul scored a two-point goal to tie the score at halftime.  Chesapeake finally had a good performance at the X as they went 19-29.  All Star Brendan Fowler struggled with a shoulder injury that hampered him throughout the second half of the season.  Fowler’s gritty performance proves he is one of the toughest players around his recovery is a must for Charlotte.  The game was close and fun to watch as both teams played to win.  Charlotte held off Chesapeake’s man up during two illegal stick penalties, but could not hold off Ben Rubeor, Drew Westervelt, and Joe Walters as they all combined for the last two points to seal the victory for Chesapeake.  Look for both teams to be much improved next season as they are both proud franchises.  Hard to believe that the regular season is over, but playoffs are here!