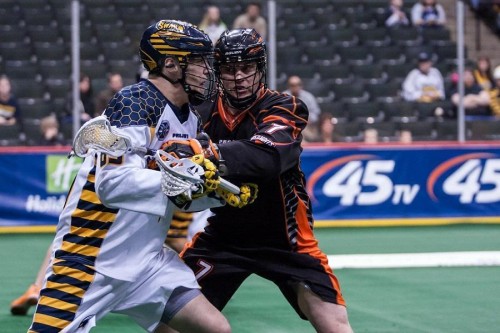 For the fourth time in his NLL career, Derek Suddons is on the move to a new team once again. The New England Blackwolves recently announced that they have come to terms with transition man/defender Derek Suddons, most recently of the Buffalo Bandits. Suddons has had extensive defensive experience, starting his career in 2002 with Columbus, and having stints with Toronto and Edmonton before landing in Buffalo in 2013.

The 6’1’’ defender out of Whitby, ON will hunker down the defensive end for the Blackwolves. In 17 games last season, Suddons had 33 loose balls while adding 3 points (1G+2A). The Blackwolves need all the help they can get after having an abysmal 4-14 record last season that saw the team lose Head Coach Blaine Harrison to resignation. With the addition of Suddons to a two year agreement now, the Blackwolves franchise finally looks like it is willing to make the necessary off-season changes to improve the team.

Suddons will complement the team well, he’ll be alongside the likes Brett Manney, Mike Manley, and Bill O’Brien. With the addition of Glenn Clark behind the bench, New England fans should look forward to see a much improved product on the floor.