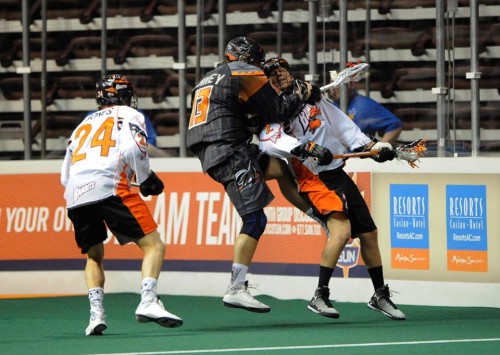 The New England Black Wolves kept up the pace as the top team in the eastern conference on Saturday with a 15-11 victory over the Buffalo Bandits. Kevin Crowley scored six goals and Evan Kirk made 56 saves in the win.

The Bandits provided an onslaught of 67 shots total and Kirk was able to hold them to just 11 goals. Leading the goal scoring effort for Buffalo was three from Ryan Benesch, and Alex Kedoh Hill added two of his own.

“We were good in the first half offensively, but we couldn’t score,” said Bandits head coach Troy Cordingley to NLL.com. “[Evan Kirk] played real well for them, then during the second half, we totally got away from our game plan. Their work ethic and will to beat us was much more than ours. Bottom line is, you’re not going to win when another team is going to outwork you.”

New England saw nine points total from Shawn Evans, while Crowley and Kevin Buchanan each had seven. Six of the seven from Crowley were goals while Buchanan’s cumulative was contributed to by five assists. Shane MacDonald, acquired this off season from Georgia, picked up four assists.

“Coming off those offensive outings I’ve had the past couple of games, it’s always nice to put the ball in the back of the net,” Crowley said to NLL.com. “Kirk played unbelievable back there, and all this gives us the chance to put the ball on my stick. Shawn Evans goes off last week for five, and then that opens it up for me because they’ve keyed up on him today. When I put up six, it really is a team effort, so I’ve got to give it those guys credit.”

New England remains at the top of the standings at 3-1, half a game ahead of Georgia. The 33 goals allowed are the fewest in the east and the fewest of any team that has played at least four games. The 51 goals total is also the third most in the league and the most of any team with fewer than five games played.

The Bandits were the first team to score more than nine goals on the Black Wolves all season. Next week Buffalo will host New England in a rematch.