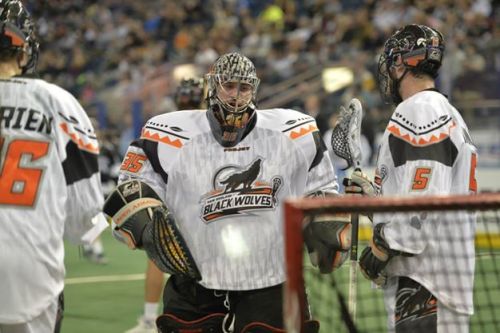 The Buffalo Bandits play host to the New England Blackowlves this evening at the First Niagara Center. These two foes met just last week where we saw the Blackwolves get the 15-11 win at the Mohegan Sun Arena. The Bandits surely would like to even the score and get a win to rebound after that upsetting performance last week.

The Blackwolves are slowly proving each and every week that they aren’t just an opening week tease, that they are the real deal. So far they are 3-1 on the season, and undefeated against their Eastern Division rivals. Shawn Evans seems to have been a blessing to a New England offense that was quite stagnant last year. With his leadership and stick skills, coupled with some very under rated offensive talent in Pat Saunders and Kevin Buchanan, these Blackwolves are looking like they have all the tools to get back to back wins against the Bandits. Also a historically weak goaltending and defensive problem looks to be no more as Evan Kirk has been playing a great couple of games this season.

The Bandits will definitely be out to redeem themselves after their defeat last week. They’ll be without some key players though. Ryan Benesch and Nick Weiss recently have been placed on the injured reserve-first level, leaving them watching this game from the press box. This is both a tremendous offensive and defensive loss. The defense had a major collapse last week in the second half, both goaltending and pure defense. The Bandits need Anthony Cosmo to be consistent and the key Buffalo defenders in Steve Priolo, Dave Brock, and Billy Dee Smith need to quarterback that defense into one that blocks the passing lanes and cut down the shooters angles. I think for Buffalo in this game, the biggest key factor in them winning or losing will be based on the defense’s performance.