Anytime a team finishes 5-9, its fans will be demanding changes in the offseason. Local media outlets will blow rumors out of proportion. Expect the Boston Cannons to improve in 2014. Don’t expect to see much roster turnover though.

Sure, they are flawed – but the Cannons are much closer to competing than the Ohio Machine or the Rochester Rattlers. There are very few holes on this roster; that’s the good news as the MLL Supplemental Draft approaches. More accurately referred to as “Pick Local Players for Your Practice Squad Day,” the Supplemental Draft has never been a top option for rebuilding a team.

Except for a few exceptions [Kevin Cunningham, Dan Groot, Chazz Woodson and Casey Powell], the players in the draft pool are there for a reason. They are either in the LXM Pro Tour [Benson Erwin, Tim Desko, Chris Ajemian, Nick Tintle, Jimmy Borell] or undecided on their futures in lacrosse [Mark Millon, Kenny Nims, Doug Shanahan, Buggs Combs]. Some players miss the 23-man roster but are drafted by the same team year-after-year. The Cannons will likely select Jon Hayes, Jake Beebe, Jason Duboe, Eric Hagarty and Patrick Gaffney… again.

Unless they [somehow] land a stud player who is willing to play in Boston, the Cannons’ supplemental picks won’t turn any heads. But again, they don’t need any head-turning picks. They need to tighten up a few aspects of their game; and here’s how they can.

Defensively, the Cannons can’t get much worse. They let up 202 goals and 15 2-point goals last season – both league highs. Am I too much of a homer for believing a healthy Jordan Burke would significantly lower these numbers? Yes? I don’t care! I’m a proud homer! I got your back, Jordan!

Although Burke will help, he won’t solve all of the Cannons’ defensive problems. Last year the perimeter defense struggled. Opposing midfielders were able to torch the Cannons in pick-and-rolls and straightforward sweeping dodges.

When the Cannons were shy to slide, they paid the price. Here’s a goal scored by Denver’s Terry Kimener. The battle is won at 0:04 when Kimener makes a subtle move to the alley, then cuts back toward the cage. Cam Flint’s athleticism usually helps him recover from any position his aggressive, lounge-happy defense puts him in, but not here.

Nobody slides to help out the rookie. Maybe they guessed that Flint would recover – if that’s the case, then they’d be correct 90% of the time. But what were they waiting for on this next play? Hayes is beat by Peyser early in the dodge. He starts sloughing in, clearly expecting a slide, but receives none.

Take a look at this play – a seemingly minor miscommunication between longtime teammates Matt Smalley and Jon Hayes. Kyle Sweeney and Hayes execute a relatively harmless switch outside the 2-point arc, putting Hayes on Jordan Hall. However, Smalley steps toward Hall causing Hayes to sink to the hole. Smalley never fully commits to Hall, though. Hall drives toward Hayes, whose momentum is now working against him, and scores an easy goal.

There’s the 2013 Cannons’ defense in a nutshell: Tentative to slide and scared to get beat by the pass. As a result, they were repeatedly punished by strong shooting offenses.

On the offensive side of the field, some fans’ have proposed trading Paul Rabil. I’m not exactly sure who proposed this, but I don’t think they understand lacrosse. Or trades in general. His production on the field and his marketability put him in a class of his own. All the lions in the world couldn’t make Kevin Barney pull the trigger on a trade.

Everyone who says Rabil isn’t the best player in the league is wrong. Plenty of people try to turn this discussion into a hot take, but honestly it’s a closed argument. I realize 2013 Rabil was worse than 2012 Rabil, but this is a side effect of the 2013 Cannons being worse than the 2012 Cannons.

Like all teams, the Cannons are at their best when they are scoring in transition. Teams that capitalize in odd-man situations normally win games. Transition is a double-edged sword however. If you are pushing the ball and failing to generate offense, then you are hurting your team.

In today’s age of specialization, most of the defensive and transitional players come off the field upon gaining possession. Transition players who have the ability to score put their teams at a huge advantage. Those who can’t score can end up turning the ball over before premier talents even step on the field. Example: Martin Bowes carries the ball across midfield. He brings the ball into the box without a problem, but then his 5-on-5 turns into a 5-on-6 and his help is cut off.

Now take a look at this rushed possession after a faceoff violation. At best, Brent Adams is looking at a 4-on-4 situation. He isn’t catching the defense sleeping by any means.

Scotty Rodgers makes the save, and the Machine is in transition the other way before Rabil and Mike Stone have substituted into the game. The easiest way to frustrate a shooter is to limit his touches. If you start doing that to your own shooters, then you’re going to have problems. Bottom line: When you have Paul Rabil use him – don’t rush possessions!

While some ‘fans’ will say lacrosse resembles hockey on foot, I say it resembles basketball on a field. [More on this at length here.] There’s a reason why certain star-studded teams are unsuccessful; the best teams are the ones that play best together. Field spacing is crucial to playing great team lacrosse. In order to space the field, you need to have players whose skillsets mesh together.

The Cannons are loaded with offensive talent. Stephen Berger and Kevin Buchanan have a remarkable ability to create shots for themselves. Matt Poskay has been one of the best finishers in the league for years. Mike Stone is excellent at locating his midrange shot. Ryan Boyle is a legend because of his ability to survey the field. Rabil and Cam Flint are two of the best dodging midfielders in the league. You get the picture – now, where’s the problem?

Too few players on this team can make you pay for leaving them open deep. Boyle and Manny have limited range; Poskay’s range is less-limited, but limited nonetheless. Only three Cannons made a 2-point shot last year – Rabil, Buchanan and defenseman Brian Farrell. While I don’t think the Cannons need to make more 2-pointers, they need midfielders who can catch-and-shoot from 12-14 yards.

Check out this possession against Ohio. Boyle has the ball on goal line extended. There are five Ohio  defenders below the 16-yard line! Stone is off the screen but just inside the 2-point arc, completely uncovered. Poskay, Manny and Buchanan are absolutely blanketed on the crease. The possession ends with a low-angle shot by Boyle – not a bad shot considering he was uncovered. 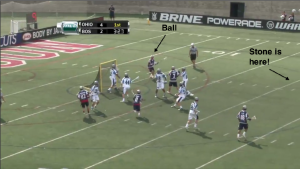 What if the Cannons had a shooter like Jeremy Sieverts, Peet Poillon or Mike Sawyer? Just a couple years ago, they did – Brad Ross. The former Cannon’s career was unfortunately cut short due to concussions and post-concussion symptoms. In 28 games with the Cannons, Ross scored 34 goals [including 10 2-point goals].

When Ross was in Boston, defenses were unable to collapse on the crease attackmen. It’s no surprise that the biggest beneficiary of Ross’ field-stretching ability was Matt Poskay. During Ross’ first season in Boston, Poskay scored 45 goals and won the 2010 Bud Light MLL MVP.

The Cannons’ offense is built to generate open outside shots. Look at this routine dodge by Rabil. He beats Greg Bice [#44] and draws the slide from Chad Weidmaier [#55] – but watch Greg Downing. [#24]. He is forced to slough in to cover for Weidmaier. Rabil quickly feeds Boyle who has a better view of the field. Boyle finds Buchanan wide open, and he buries.

The Cannons love to run this motion. Buchanan – a natural attackman – is a great fit at midfield with Rabil and Stone. He and Stone are the best spot-up shooters on the team. If they can consistently hit these shots in 2014 [and if they start counting secondary assists], then you’ll stop hearing people calling for a Rabil trade. Actually, scratch that – you might hear people in Chesapeake and New York calling for one.