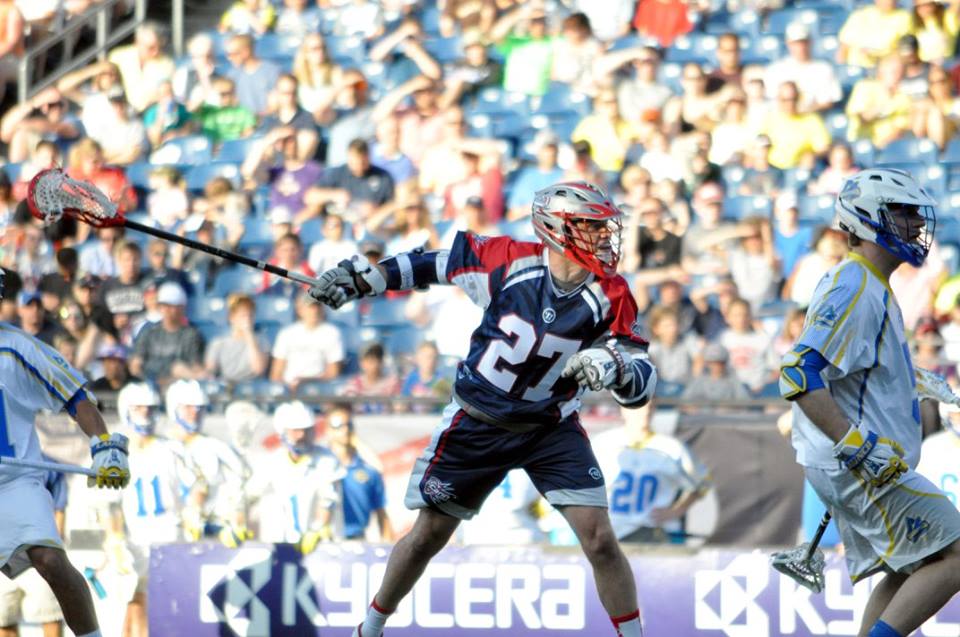 Over thirty-one thousand people passed through the turnstiles of Mile High Stadium on Saturday night to watch the Denver Outlaws play host to the Boston Cannons. For the second year in a row, Boston defeated Denver on the Fourth of July. While the 2014 edition was at least a respectable affair, the fireworks started early and often inside the stadium as Boston took no prisoners in 2015, utterly trouncing the Outlaws by a final score of 22-9. Ryan Tucker and Davey Emala led the Cannons in scoring, each notching 6 points on the night. Will Manny chipped in five points of his own for the winning side and Jordan Burke stopped 16 of 25 shots to preserve the win. Drew Snider lead the Outlaws with four goals.

Denver started off the scoring for the evening, tallying the games first three goals. For a few moments it seemed as though the defending champs had found their groove again. Anthony Kelly was back in the line up (he went 19 for 30 on the night) and anchored a faceoff unit that was virtually non-existent the past two weeks.

Denver keeper Jesse Schwartzman showed flashes of his old self in the first few minutes of the game, making a couple of spectacular saves.

Then, the Cannons appeared to remember that the armaments of their mascot were far superior to the six-shooters typically ascribed to outlaws of the old west. Scott Ratliff engineered the Cannons first two goals, the first with an assist from up top to Will Manny on the back post on the opposite side of the field. For an encore, the former Loyola Greyhound took the ball to the rack himself.

With a 3-2 lead the wheels remained on the bus for the moment–that is until Ryan Tucker began his assault on the MLL record books. Tucker stung the Outlaws from two-point land to put the visitors up 4-3. Denver wouldn’t come close to leading again in the game. An unassisted Brent Adams goal provided the filling to Tucker’s two point sandwich, because he rattled off his second “two” of the evening less than two minutes after his first. When the dust settled on the first quarter Boston led 8-4.

When asked about the play of goalkeeper Jesse Schwartzman this week, Denver Head Coach B. J. O’Hara stood behind his starting twine-minder. Still, after allowing eight goals in the first, Johnny Rodriguez came in to play the second quarter. Rodriguez didn’t fare much better than Schwartzman, which suggests a more systemic issue with the team’s defense. Will Manny’s two-pointer came off a controversial play so I, for one, won’t hang Rodriguez out to dry for that one. Schwartzman returned to play the second half.

Attackman Eric Law returned to the line up after spending about a month on Injured Reserve. The Denver native didn’t start the game, but got run time in the first half. John Grant caught a streaking Law for the latter’s lone goal of the game. Law spent most of the second half on the sideline without his lid on – not a good sign for Denver.

Davey Emala took over the game in the third quarter. The former Tar Heel scored goals in the waning moments of the first and second quarter (this was quite literal as he scored as time ran out in the second), but he saved his coup de grace for the third quarter when he laid four more goals on the struggling Denver defense. This included a natural hat trick (the last one a shorthanded tally) to end the stanza.

Ryan Tucker wasn’t done for the evening, and uncorked his third two-point goal of the evening to open the fourth quarter. This tied MLL single game record for two-pointers.

How about some dap for Jordan Burke? He made four of his sixteen saves in the third quarter, keeping Denver completely off the board. The Outlaws only managed two second-half goals.

While the game was an embarrassment for the Denver players, and likely knocking them out of the playoff picture (yes, I’m calling it now), the win moved Boston into sole possession of second place in the league table.

Truly embarrassed by our performance in front of an amazing Denver crowd. Hats off to the Cannons on a perfectly played game.

Looking ahead, Boston doesn’t have a cakewalk; they still have a home-and-home with Ohio, and a trip to Chesapeake on their plate. The Machine lost to Rochester and will likely be playing angry next week.

Denver pretty much has to win out to have a chance at the playoffs. They still have two games against New York, and a home game against the resurgent Florida Launch. Will Denver miss the playoffs for the first time in franchise history? On the tails of their first championship no less? They have a quick turn-around, playing New York, on Long Island, on Thursday. The last time Denver had a short week? They defeated Chesapeake at home 17-10 on May 24, and then got rocked by Ohio, 18-12 on May 29. Things aren’t starting out as well this time around. Hopefully, for Denver, they can fix things on the back end this time around. Time will tell.