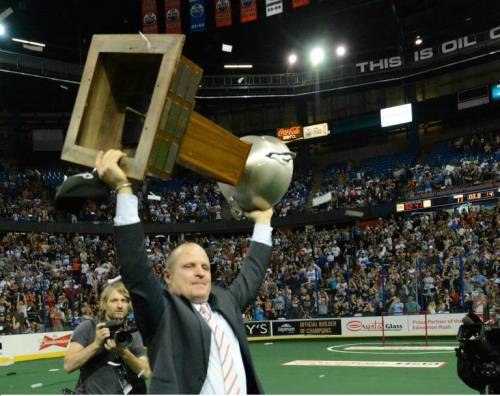 The nominees for the NLL Head Coach of the Year Award—also known as the Les Bartley Award—have been announced and now it’s a matter of waiting until September to see who the winner is.

The nominees for 2015 are Mike Hasen of the Rochester Knighthawks, Derek Keenan of the Edmonton Rush, and John Lovell of the Toronto Rock.

Lovell and Keenan faced each other in the Champion’s Cup this year, with Keenan’s Rush earning their first-ever league title. Hasen’s Knighthawks got as far as the East Division finals before being stopped by the Rock—that ended Rochester’s quest for a record-breaking fourth straight Champion’s Cup.

Hasen led his team to a 12-6 record in the regular season and second place in the East; Lovell’s Rock had the best record in the NLL at 14-4; Keenan and the Rush led the West Division with a 13-5 record.

Ultimately, the big difference maker this year was Keenan. The Rush started the season 0-2 while Keenan attended to the death of his wife. Once he returned, Edmonton’s fortunes reversed as they won the next four in a row.

Going into the season, Edmonton had serious questions about their offense, with Curtis Knight lost for the year to injury while first-pick overall Ben McIntosh was highly touted but untested. After scoring just 18 goals in the first two games, Keenan came back into the picture and turned them into an offensive powerhouse, leading the NLL in goals by the end of the year.