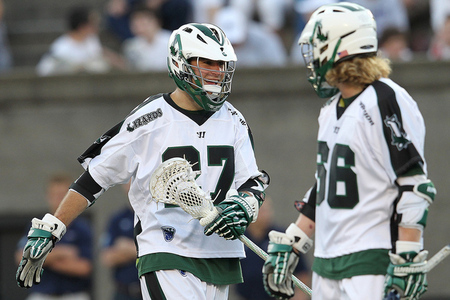 The Boston Cannons are in a slump. They have now lost two in a row, tonight falling to the Long Island Lizards by a score of 13-10. The Cannons fall into a tie for second place with the Denver Outlaws, while the Chesapeake Bayhawks move into first place with their win over the Charlotte Hounds.

Max Seibald, Matt Gibson and Ryan Young each had two goals to lead the Lizards in their victory. Drew Adams gave up ten goals in net and made sixteen saves.

For the Cannons, Matt Poskay scored the hat trick to lead them in scoring. They also got two goal games from Brian Farrell and Brad Ross.

Jordan Bukre allowed eleven goals in net and made just eight saves. It is his second straight loss after he had won nine games in a row before his loss in Rochester, where he gave up seventeen goals to the Rattlers.

The Cannons won the face off battle, 13-11. They also had twenty six shots on goal compared to the nineteen from the Lizards. The Cannons were 9-0 in their last nine games before these two losses, and it’s the first time they have lost back to back games since last season.