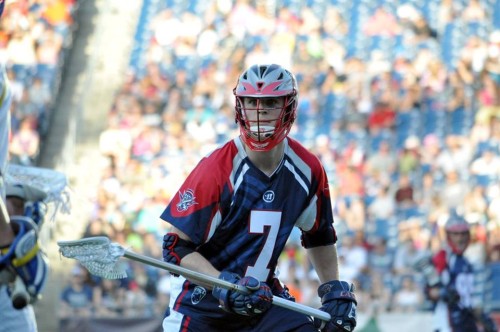 The Boston Cannons welcomed former players Ryan Tucker and Scott Ratliff and former coach John Tucker back for their home opener, coming away with a 13-12 win over the Atlanta Blaze. Max Seibald led the way for the home team with six points.

The Cannons opened the scoring in the first period with Will Manny scoring, off an assist from Davey Emala. Ryan Tucker would greet his former team to open the scoring for the visitors, tying the game at one. Max Seibald would take command for the home team’s offense until halftime, scoring four of five goals to close the half.

Atlanta’s Kevin Rice would score his first, followed by midfielder Justin Pennington, and closing the first quarter with Conrad Oberbeck to take a 4-2 lead after one. Rice would open the second quarter to extend the lead to 5-2.

Seibald and Rice would go back and forth scoring to open in second, as every time Rice would score, Seibald would answer for the home team. After two straight from Seibald, Rice would answer. The two would combine for three goals each in the quarter.

To close out the half, Henry Schoonmaker and Davey Emala would trade goals to give the Blaze the lead at 8-7.

Manny, Michael Begley, Stanwick, and Brent Adams would score to take a 12-9 lead heading into the last stanza. The goal of the game came from Adams, who drove behind the goal with seconds left on the shot clock, leaped into the crease, while dunking the ball over the crossbar from behind the net.

Atlanta would come on strong late, scoring the final three goals to come within one. They had possession with a minute remaining, but a turnover allowed the Cannons to run out the clock.

Adam Ghitelman had a solid game, leading to a lot of transition and fan appreciation, running upfield after every save. Ghitelman ended with a spectacular 18 save effort. Tyler Fiorito won for the Cannons with 10 saves.

Max Seibald had five points to lead the team to win, single handedly keeping the Cannons alive in the second quarter (4 goals, 1 assist). Kevin Rice ended the contest with six points on five goals, one assist in the losing effort.