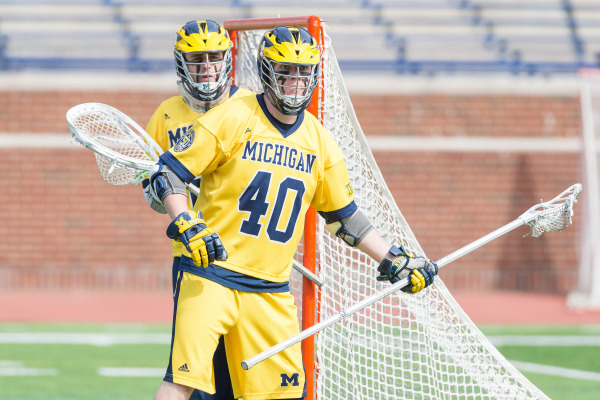 After over eight months of no college lacrosse, many of us had to find things to do while we waited for the return of college lacrosse. That meant spending the nice weather somewhere warm (which was everywhere until after Christmas), watching other sports, or watching more lacrosse. But that long wait is over.

Yes, the majority of college teams won’t start until later in the month, but still, we finally get to watch some college lacrosse! And even better, NO JANUARY GAMES!!! And with a mainly mild winter (except for last weekend with a huge snowstorm throughout the east coast), we may not see many games getting postponed due to snow!

So with that, let’s give you a preview of the weekend’s biggest games. There’s a few games in Divisions II and III, but there’s nine games to start the Division I season. Here’s a few of the main games to watch for:

The 2016 season kicks off with a pretty good game between two of the nation’s service academies. The Falcons were narrowly defeated at home by the Midshipmen last year in the final game of the regular season for both teams. Both teams have some high expectations for 2016, especially for the Midshipmen, who finished 2015 as Patriot League regular-season champions. The attack unit of seniors T.J. Hanzsche, Patrick Keena, and sophomore Jack Ray all return to Annapolis, along with junior FOGO Brady Dove and junior defenseman Matt Rees. For Air Force, sophomore attackman Chris Walsch is a SoCon preseason all-conference selection after leading the Falcons last season with 37 goals and 55 points. Midfielders Nick Hruby, Christopher Allen, and Austin Smith also return to Colorado, while goaltender Doug Gouchoe returns in the crease for his senior year. The game will be streamed online.

After upsetting Duke and nearly doing the same to Denver in the NCAA Tournament, the Buckeyes look to make more noise in the Big Ten this season. The losses of Jesse King, Turner Evans, and David Planning will hurt for the Buckeyes, but there are still plenty of weapons in Columbus. Carter Brown, Colin Chell, and John Kelly all made big impacts last season for Ohio State. Jake Withers will likely take over faceoff duties from Christopher May, and the Buckeyes brought in junior transfer Austin Shanks from Bellarmine. Robby Haus is back to anchor the defense, while Tom Carey returns to backstop the Buckeyes. Sophomore Jonah Moore is Furman’s leading returning scorer from last season.

Is this the year that Michigan makes their entrance into the group of top lacrosse teams in the nation? With guys like Ian King, Kyle Jackson, Mikie Schlosser, and Gerald Brown, Michigan hopes to make it to the Big Ten Tournament in year two of the Big Ten. Defense will be a question, as Brown in net, along with LSM Chase Brown and defenseman Stefan Bergman will look to keep the ball out of the net. For the Tar Heels, there’s a lot of questions to answer, especially with the losses of Joey Sankey and Jimmy Bitter at attack. Luke Goldstock is the remaining attackman from last season, and will be joined by Steve Pontrello, who moves from the midfield, and perhaps either Patrick Kelly or his freshman brother Timmy Kelly. With Kieran Burke not on the starting roster, who will replace him in the net? Either Brian Balkam, Eddie Gilman, Colin Reder, or Alex Bassil are the team’s remaining goaltenders. But the defensive core remains solid, with All-Americans Austin Pifani and Tate Jozokos returning as well.

A classic New England opener between the two teams, as Boston looks for their first ever win against the Friars in program history. Will Mazzone, Michael Perettine, Joshua Keller, and Keenan Assaraf return to Providence as the team’s returning top scorers. Mazzone led the team in goals and points last season, and was also tied for the team league in assists. Jarrod Neumann is a Preseason All-Big East selection at defense. For the Terriers, Cal Dearth and Sam Talkow were named to the Preseason All-Patriot League Team, while goalkeeper Christian Carson-Banister joined the two as being named preseason All-Americans by Inside Lacrosse. Pennsylvania products Adam Schaal and Ryan Hilburn will also look to provide scoring support at attack. The game will be streamed online.

In the past four meetings, each game was decided by two goals or fewer, and it should provide a similar result in Lewisburg. Delaware is coming off a 5-10 record last season, but tied Colgate in their scrimmage last week. Jackson Finigan is the team’s leading returner, and joins Elijah Conte and Steve DeLargy as team captains. Connor Lalley is an All-CAA selection at defense as well. In goal, Conor Peaks and Syracuse transfer Parker Ferrigan have competed for the starting spot. As for the Bison, they return after a 9-6 record and appearing in the Patriot League tournament. Senior LSM Alex Spring is a Preseason All-American selection, and Thomas Flibotte returns to anchor the midfield, while Sean Doyle and Will Sands are two of the league’s top attackmen.