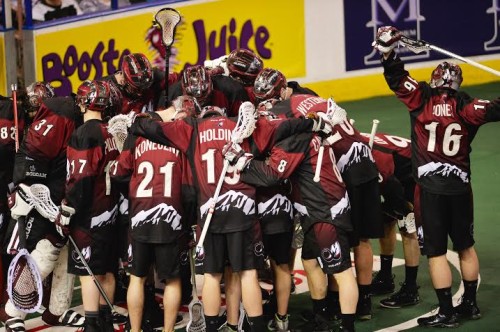 In what is expected to be one of the most talented drafts in NLL history, the Colorado Mammoth are looking like one team that won’t be doing much—they don’t pick until the fourth round and have just three selections overall.

Perhaps because of this, the Mammoth front office has made some significant moves in the free agent market. They acquired forward Callum Crawford on Aug. 19, giving them what might be one of the most dangerous attack units in the league, with Crawford, Adam Jones, John Grant Jr., Drew Westervelt, and Jeremy Noble all capable of having big nights.

On August 25 they also picked up defenseman Greg Downing to shore up a defensive squad that was middle-of-the-pack in goals against in 2015.

Because they aren’t making a pick in this year’s draft until the 32nd overall selection, they’ll be looking at players like defenseman Luc Magnan and transition Dane Sorensen as prospects. Down at this part of the draft, you’ll sometimes find a diamond in the rough, but these guys will be long shots to make the roster.

The Mammoth have had some pretty good drafts in recent years, so perhaps they are due for a quiet one. They had two first round picks last year and got immediate results out of Eli McLaughlin (38 points) and Robert Hope (72 loose balls, 28 caused turnovers). Their second round pick, Alex Buque, was outstanding as their backup goalie in his rookie campaign, posting a 9.36 goals against average. In 2013 they took goalie Dillon Ward in the first round and he has quickly matured into Colorado’s No. 1 netminder, giving them two young, talented athletes between the pipes.

So while it looks unlikely that the Mammoth will make much of a splash on Sept. 28, their current roster has plenty of depth and its fair share of young guns already, putting them in good shape to be competitive in the 2016 season.