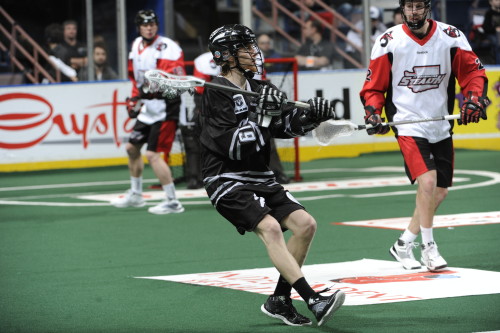 Last season Mike Burke had his breakout NLL performance. After bouncing between Toronto and New England and then finally to Colorado, Burke found his role on an NLL team. Burke scored six goals and nine assists in his Mammoth campaign in 2015, which began midway through the season.

Burke was drafted in 2012 to the Edmonton Rush. He played two career games with them in the 2013 season, scoring one goal, before being cut. He wouldn’t find his way back to an NLL roster until 2015.

Before the 2015 season, Burke signed a free agent deal with the Toronto Rock. He was traded to the New England Black Wolves as a part of the 2015 NLL draft day trade that sent Brodie Merrill to Toronto. Before he ever played a a game with New England he was cut, and returned to Toronto shortly before being cut again.

He ended up with the Mammoth for nine games during the 2015 season. His first contest with Colorado was at New England on February 2nd, when he burned his former team with a three-point night. He scored three points again during the final game of the regular season on May 2nd when the Mammoth defeated the team that drafted him, the Edmonton Rush.

The Mammoth signed two additional players in Tom McKee and Matthew Noble. McKee played college lacrosse with the Air Force Falcons and graduated in 2014, while Noble played at Cortland.