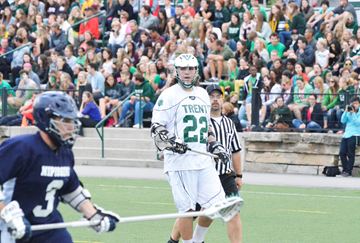 In 2008 and 2009 the Trent Excalibur finished first in the East and looked like they were on the rise to becoming a powerhouse in the Canadian University Field Lacrosse Association. But the next three seasons were a struggle for the Excalibur, as the team failed to reach .500 in each of those seasons. Last year Trent finished with a 6-6 record, won a playoff game and lost by one goal to the Brock Badgers in the Baggataway Cup quarterfinals, but Head Coach Geoff McKinley believes that loss could have been the best thing for the program.

“As heartbreaking as that loss was, it gave our guys confidence that we can roll with the big dogs,” said McKinley. “As we approach training camp you can feel the excitement and energy. The guys are pumped.”  And they should be pumped. Not only does Trent have a strong core, but they also have an impressive incoming recruiting class with a surplus of experience at the NCAA level.


Fernandes, Perroni, Kitchen, LeClerc and Leith are all coming off a long playoff run with the Green Gaels, who lost in the finals of the Founders Cup Jr. B National Championships. Fernandes led the OJBLL East in scoring and was named to the Founders Cup All-Star team.

Former Green Gael and current Whitby Warrior Cam Garlin will add great size and skill to the attack core. Garlin will play one season with Trent before transferring to High Point University(DI).

Demarchi has the ability to play multiple positions as he posted 59 points(36G,23A) in 57 games while playing attack and midfield at Denison.

Nic Mutton, Josh Miller and Kitchen will also add some more Peterborough talent to their roster which is already filled with lots of local players.

Of the returning players, seniors Cole Murduff and Brandon Armstrong will anchor the Trent defense once again this season. Murduff held standout attackman Brandon Slade to just one assist in the quarterfinal game last season and was an honorable mention All-Canadian last season. LeClerc, a transfer from the University of Richmond will most likely round out the starting close defense. With his great hands and athleticism, he may also end up at the Long Stick Midfielder position which has yet to be decided by Defensive Coordinator Mark Farthing.

A big part of Trent’s game will be their play at the defensive midfield position. Ethan Schott, another Green Gaels product, is coming off a hot summer where he was crowned the 2016 Ontario Jr.B League(OJBLL) Defender of the Year. Schott has also been running some LSM during camp and may end up at that position. Cameron Page and Lyman Beattie will share the d-middie duties with Schott and they will hope to fill a major void left by All-Canadian Honourable Mention Johnny Lynch who transferred to Simon Fraser University.

On other side of the ball in midfield, Travis Szabolcs, Dan Michel and Garrett Eddy will likely run the first line and pose problems for teams all year. Szabolcs played attack last season and led the team in scoring in 2015 with 37 points(19G,18A). Eddy trailed just behind with 32(20G,12A). Michel netted 10 goals and six assists in his first season of CUFLA ball and will likely increase his offensive production significantly in 2016.

TU has a chance to finally dethrone one of the two beasts in the east, McGill and Bishops. The two teams have occupied the top two spots in their division for the past five seasons.

“We expect to compete in every game and host a home playoff game and make the Baggataway tournament,” said McKinley. “We will be a gritty team that works hard and plays fast.”

The Excalibur will get to see where they stand early as they have a rematch of the 2015 Baggataway Cup quarterfinal against Brock, this time in a pre-season exhibition game.

“We are excited to be able to play a top level opponent as part of our team selection process,” said McKinley. “It will most definitely give us some insight as what guys can do.”   The game will take place on September 3rd at 12 p.m. at Justin Chiu Stadium in Peterborough. Their regular season begins on September 10th on the road against Carlton, followed by a trip to Lennoxville on Sunday to take on the Bishop’s Gaiters.