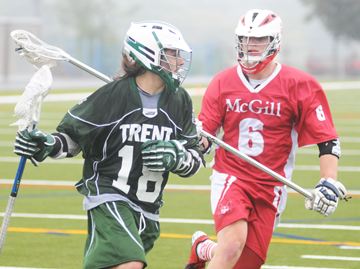 It’s been a hot summer for lacrosse in the City of Peterborough. The Sr. Lakers are in game 7 of the Major Series Lacrosse finals tonight, the Jr.A’s lost in the Ontario finals and the Jr.C’s won their first ever league championship. Winning isn’t a new trend for this historic lacrosse community, but for the ‘borough based Trent University Excalibur, it’s been awhile since they’ve been deemed winners. With all the success in Peterborough, Trent feels the pressure to keep the winning rolling into the fall.

“I think just being the competitive group we are, the pressure to win will always be there, and that coming from ourselves more than anything else,” said defensive coordinator and Peterborough native Mark Farthing. “The City has been having a successful summer, and that is certainly something we would like to carry on and be a part of.”

Head Coach Geoff McKinley believes the Peterborough lacrosse community has and always will play a huge role for his program.

“We 100% embrace the lacrosse tradition here in Peterborough.” said McKinley. “We get a ton of support from the community and generally close to half of our roster is made up of Peterborough Minor Lacrosse grads. The university also strongly supports our program as they are fully aware of what a lacrosse enthusiastic community we have here. Peterborough loves sports.”

Trent enjoyed some winning of their own in the past. The program joined CUFLA in 2007, and the very next two seasons, the Excalibur won the East Division, clinching back to back spots in the Baggataway Cup finals. Coach McKinley believes the recent struggles of the program has actually helped his team learn and grow.

It’s been a rebuilding process for the Excalibur for the past four seasons, posting below .500 seasons since 2010, having their best season in 2012 with a 4-5 record. Trent also reached the Baggataway Cup weekend for the first time since 2009, but they fell in the quarter finals. Coach McKinley believes the recent struggles of the program has actually helped his team learn and grow.

“Honestly, we had four losses last year that were two goals or less and six games that were within 4 goals,” said McKinley. “Experience is a huge factor at this level. Our guys learned many seasons worth of ‘in game lessons’ last year, they saw how little things can become bigger things, but most importantly they saw they could run with the so called “big boys” in the East. The biggest thing we will emphasize as training camp beings is consistency, it was what we lacked last year and what we need to have to be successful this year.”

If there’s going to be a resurgence of Trent lacrosse, the senior duo of Josh Gilray and Travis Szabolcs will play a huge role in the comeback.

The two attackmen combined for 62 points in 2014. In 31 regular season games played, senior Gilray has tallied 89 points for the Excalibur. The Oshawa,ON native continued his scoring success this summer, tallying 11 goals, 18 assists for 29 points in 14 games with the Brooklin Merchants Sr B. The big 6’6 attackman Szabolcs had a strong summer as well, potting 36 points, good enough for 10th among all Ontario Senior B scorers.

The Trent coaching staff will look to junior Nick Finlay to make an impact. The Ottawa,ON native is a big body presence with the ability to play both sides of the ball. Last season, he managed to tally just three goals in 12 games, but coach McKinley believes that should change in 2015.

“Nick was a part of a deep playoff run with the JR A Lakers and also played JR B in Gloucester for the summer,” said McKinley. “He will add some depth on middie.”

On the defensive side of the ball, the Excalibur will be an experienced bunch anchored by senior defender Brandon Armstrong.

“Our D corpse is a veteran group as we have not graduated a long pole in three seasons,” said Farthing. “This is a group with great stick skills, hounds on loose balls, and the ability to get stops when we need them. I believe this season will be a coming out party for our back-end.”

Armstrong has been a standout defender for Trent the past the past three seasons, but last season he didn’t quite get the recognition he believed the Orangeville,ON native deserved.

“Armstrong was our MVP last season and was absolutely robbed All-Canadian honours at years end. After a solid CLAX season with the Durham Turfdogs, Army is ready to put his stamp on this defense.”

McKinley echoed his defensive coordinators thoughts on their star defender.

“Brandon will likely be one of the top poles in the East this year,” said McKinley” “His speed and stick make him an added threat.”

There’s a battle for the starting position in between the pipes at training camp. Sophomore Austin Cairns returns to the Excalibur after winning the starting position last year as a freshmen. Two 15 goal games against McGill brought his goals against average up to 9.35. Without those two games, his average would have been 5.60, good enough for fifth among all CUFLA netminders. Fellow sophomore netminder Liam Wynne returns to Trent for a second season. The Green Gaels Jr.B finished with a 2-2 record while posting a 8.63 goals against average. The wildcard of the goalie race is Peterborough product Kevin Holton. The freshmen tender returns to the game after taking quite some time off but told the Trent coaching staff “I think I’ve still got it.” So far in camp, it looks like the the hometown boy still does have it.

“Dan will not only add depth but a strong leadership component,” said McKinley.

Michel finished fourth in the Maritime University Field Lacrosse League scoring race in 2014 with 37 point, which 34 of them were goals. With the Lakers this past summer, the Courtice,ON native found the back of the cage 10 times while adding 29 helpers for 39 points.

Michel wasn’t the only big time transfer Trent acquired for 2014, as Garrett Eddy joins the Excalibur midfield ranks. The joins Trent University after transfering from NCAA DIII powerhouse Rochester Institute of Technology. The Bowmanville,ON native played 10 games with the Tigers, chipping in with a goal and four assists in his freshmen season at RIT. This past summer, Eddy scored three goals and two assists in a more defensive role with the Jr.A Whitby Warriors.

A pair of Lakers Jr.C freshmen join the Excalibur coming off a Meredith Cup winning season.
“Colin Brown was a member of the Evolve Elite Travel program and played a defensive role in the Lakers Meredith Cup Win,” said McKinley. “Travis Ferguson will also join the program this year. He’s a graduate of high school perennial powerhouse the Holy Cross Hurricanes. He is a shifty player that we will look to have contribute on offense.”

The Trent Excalibur open their season on September 12th as they entertain the 2015 Baggataway Cup Hosts Bishop’s Gaiters at Justin Chiu Stadium. The very next day, they host the Queen’s Gaels, a team they will be fighting for a top three spot in the East Division.

With a strong core of returning veteran players combined with a skilled incoming recruiting class, McKinley and his coaching staff has built the perfect formula for a program ready to take the next step.