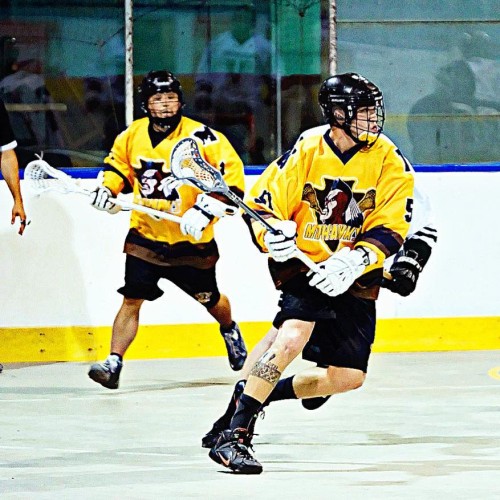 Corey Thompson is a forward from the Akwesasne Reservation. Corey has grown up with lacrosse being a huge part of his life and his culture. He has played on many different levels including NCAA for Utica College along as Akwesasne Indians Junior A, and at the Senior B level for St. Regis Braves where he won a 2012 presidents cup. Also Akwesense Outlawz and Kahnawke Mohawks the past two summers. Now he is a big part of Thompson Lacrosse Company and looking to make his way to the NLL.

How old were you when you first started playing lacrosse?

Was box lacrosse the first organized lacrosse you played?

Yeah, other than the backyard          .

Who has plays a big part in your lacrosse career?

Good question! I’d say my cousin Ty Thompson I definitely wouldn’t be where I am today if it wasn’t for him          .

What’s it like to work along side Ty and other family members with Thompson lacrosse?

It’s great man, we got our own product in the market, the Thompson I6 head. It’s awesome and kids love it, we love it and still, everyday it blows us away like how cool the head actually is          .

What made you guy’s say let’s make our own company?

I think it was just the fact that lacrosse is growing so much & we always wanted to share a part of the dream we always had growing up and share it in the best way          .

Being that you’re going into the NLL draft,what team did you root for growing up?

It’s crazy to think of like actually living the dream and taking that next step into the NLL but I’ve always rooted for teams like Buffalo, Rochester Minnesota, Edmonton, Calgary and so on, it just depends on the players I like to watch.

What’s the best part of your game that can really help out one of those teams out?

Best part of my game is the potential. I can contribute at a high level and help a team win. I feel like making something out of nothing is what I’m best at. Also being such an unsung and underrated player that right there sums it up for me

Also what has been your proudest lacrosse moment?

My proudest lacrosse moment… I would have to say my journey.. The fact that I’ve been able to experience and play with some of if not the best lacrosse player’s in the world. For example, trying out for The Iroquois Nationals. That right there is what I’m most proud of. Yeah I didn’t make the team but I still had fun playing for the creator and that’s all that matters.

What would it feel like to hear your name called ?