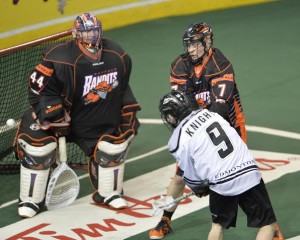 The Saskatchewan Rush are riding high after their 2015 NLL title (albeit won while in Edmonton). Thei roster is stacked with young stars for years to come with the likes of Mark Matthews, Ben McIntosh, and Robert Church.

However, the Rush title was won without a player who was thought to be one of the keys to their offense, and he will be making his return in 2016. Curtis Knight, who tore his ACL playing in the CUFLA, remains under contract with the Rush going into the 2016 season.

“In all honesty it wasn’t easy seeing my team win and not being able to play.” says Knight. “It’s tough to watch a single game let alone watch your team win a championship without you. Watching games just makes you want to play that much more. That being said, I am very happy for all the guys for winning and I still feel like I am a part of the team and the championship victory. It gives me motivation to try and win again this coming season.”

Knight was on pace to be one of the young faces of the Rush along with Mark Matthews, Riley Loewen, and Robert Church. In the 2012 NLL entry draft, the Rush held two first round draft picks. They used their first pick, the first overall selection, on Matthews and their second first round selection on Knight. The second year player scored 72 points in the 2014 season, far exceeding his 46 from his rookie year. Everything about Knight’s second season showed progress. His shooting percentage, shots total, loose balls, and points per game went up.

There was no reason those numbers wouldn’t keep climbing in his third season. 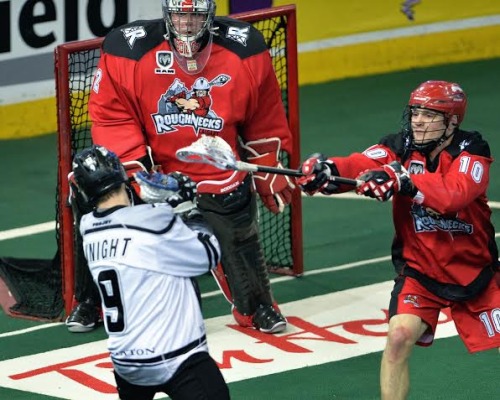 “I have been seeing a lot of progress with my knee.” Knight says. “I am still doing physio and workouts daily and should be cleared to play again in September. The knee already feels great and I feel like I could start playing now. I plan on playing in the Hawaii Tournament so that will be a good test before training camp starts.”

In the 2014 season, Knight led all second year players in points with his 72 other than his team mate Matthews. He was second on the team in overall scoring.

“I really enjoyed playing in Edmonton so it kind of sucks to have to leave.” says Knight. “I am excited for a new opportunity in a new city though. I hope we can bring some excitement to Saskatchewan. I think bringing a championship team to a new city should certainly interest some new fans. Hopefully we can fill the arena and give Saskatchewan another team to cheer for. And hey the shorter flight from Ontario is a bonus.”