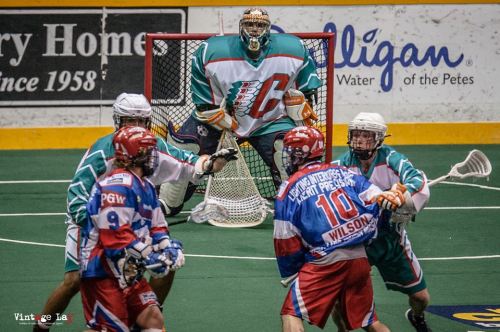 Peterborough Lakers fans may want to hold off on finalizing their plans to head west for the Mann Cup just yet.

The Lakers had a 2-0 series lead over the Six Nations Chiefs heading into Friday’s game at the Iroquois Lacrosse Arena, but now lead only 2-1 as the Chiefs won game three 7-6.

It’s been a weird series.

Game one was a low scoring, defensive battle that the Lakers won 6-4. Both teams are known for flashy, high scoring games, but game one just wasn’t one of those. It was a gritty, tight game at both ends of the floor with the Lakers surprising a lot of people by getting the win in the Chiefs barn.

Game two was exactly the opposite. Some fans described it as “insane,” and the raucous crowd of 3200+ in attendance were only half the reason why. Tied at three after the first period, the teams both exploded for a combined 18 goals in the second period. Three goalie’s GAA’s took a dive in the toilet after game two, with the final score 18-14. Shawn Evans had 14 points for Peterborough. Matt Vinc let in all 14 of the Chiefs goals, while Dillon Ward was shelled for 11 and Brandon Miller 7 in the Chiefs net. Defense was clearly not the name of that game. It was anybody’s net, but in the playoffs the only thing that matters is the final score, and as Lakers head coach Mike Hasen stated after the game, “We got the win so we’ll take it and we’ll get ready for [Friday].”

In game three, both teams settled down and focused again on defense. The Lakers started Evan Kirk as Vinc was attending a wedding. Kirk looked great in net, square to the shots and kicking out the pads any chance he got. The Chiefs elected to put in the more experienced Miller after starting Ward in games one and two. It was a close battle, although Six Nations never trailed. Up 3-2 after the first and 5-4 after the second, Adam Jones tied the game for the Lakers at the 9:11 mark of the third period. Stephen Keogh put the Chiefs ahead just 1:15 later. The Lakers were unable to score again, with Miller stoning Curtis Dickson with just nine seconds left to play. Dhane Smith led the Chiefs with a hat trick.

So – do we have a pattern? Low scoring, high scoring, low scoring. Can we expect another ridiculous game on Sunday?

Either the Lakers, who have the home crowd advantage and know how to use it, take a 3-1 stranglehold with three more chances to win it, or the Chiefs turn the tide and knot the series at two.

The Chiefs may be defending champs, but the Lakers are stacked with MSL and NLL veterans that know how to win. They have proven in this series that the regular season is no indication of playoff success, and that they have the will and skill to compete with, and beat, the Chiefs.