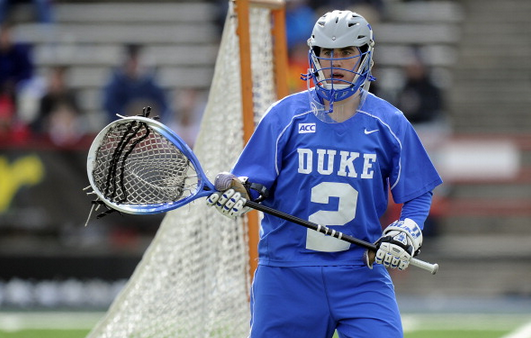 Boston, Massachusetts – Deemer Class ended 2016 with 49 goals, five coming in today’s contest.  Duke would enter in the NCAA Tournament after a 15-8 win over the host Boston University Terriers.

Boston University came on strong to begin the contest, taking the first four shots of the game.  Duke’s goalie Danny Fowler had to be strong from start and was able to come up with the first save of the game.  On the following possession, Duke would open the scoring in the contest.  Midfielder Brad Smith scored after senior Case Matheis drew the defense.

James Burr, assisted by Ryan Hilburn, was able to tie the score at 1 when he beat Fowler cutting through the middle.  The Terriers had to work to finally Duke’s defense came off the bus ready.  Turnovers continued to give BU chances.  The Blue Devils were turnover prone on offense allowing continued possessions the other way.

A number of close-calls would not allow either team to break the deadlock. Terriers had the last opportunity, where Burr had a shot to break the tie as time expired.  Fowler was able to deny the Terriers.  At the end of the first quarter, the Terriers and Blue Devils were tied at one.

On their opening possession, Boston University would take a 2-1 advantage.  On the substitution, Cal Dearth would streak, unguarded into the middle.  Jack Wilson collected an assist on the play.  Justin Guterding would find Jack Bruckner in the middle, able to score his 38th goal of the season.

Senior All-ACC midfielder Deemer Class would give the visitors the lead back.  Class would get his second straight, out of a timeout, to extend the lead.  With 9:17 left in the half, Duke led 4-2.  Brad Smith would take the lead to three, as he beat Terrier goalie Christian Carson-Banister.

After procedure off the following face off, Matheis found Guterding.  Guterding found just enough angle to beat Banister.  The Terriers were finally able to break the drought as Hilburn would take on two defenders and drive above the crease to cut the lead to three at 6-3.

Duke quickly took a four-goal lead back.  Class found linemate Chad Cohan as the Terriers moved into a zone defense to keep the Blue Devils outside.  Banister had to be up to the task, stopping Cohan on consecutive shots and also stopping ACC Player of the Year Miles Jones.    After a timeout, Cohan would return the favor, finding Class for his third goal of the game.  For the home team, it was a tale of two quarters.

The first quarter was Duke turning the ball on offense and playing stingy defense, with the Terriers taking making a number of turnovers on offense in the second.  Duke peppered the Terrier zone to take an 8-3 lead into halftime.

To begin the second half, Duke continued their offensive pressure.  Banister stood strong until Deemer Class scored his forty-eighth goal of the season.  BU had a chance to get one back, but a crease violation by Ryan Wilburn gave Duke possession back.  Guterding would get Duke to double-digits and a seven-goal lead with 8:54 left in the quarter.

Immediately on the following face off, Duke long-pole and Boston native, Ian Yanulis scored to make the score 11-3 in favor of the visitors.  Duke’s possessions were able to find the holes in the Terrier defense.  Likewise, Boston continued their trend in turnovers.  This led to the exhaustion of their defense.

Case Matheis initiated after a long Duke possession continually pressured the BU defense, scoring on his final regular season contest in a Duke uniform.  Boston would have an answer.  Boston would score their first goal of the quarter as Cal Dearth would score a goal and Boston would also go on a man-advantage.  Duke would run out the penalty and lead 12-4 heading into the final quarter of the 2016 regular season.

Deemer Class would score his fifth goal of the game to open the fourth quarter.  Class shot the ball and his initial offering would hit the post, to which Class would get the rebound with Banister out of the net.  His next goal would give him fifty for the season.

Burr, who opened the scoring on the day, found the back of the net beating new Duke goalie Luke Aaron.  Jack Wilson would give the Terriers their first back-to-back scoring.  With 11:49, Duke would lead 13-6.

Duke would have their first man-advantage and Jack Bruckner would take advantage of it.  Miles Jones found Bruckner in the middle, who turned and beat Banister.  With the assist, Jones continues his consecutive point streak, now standing at 53.

Miles Jones would get his first goal of the game with 3:54 to give the Blue Devils a nine-goal lead.  James Burr and Cal Dreath would score back-to-back man-advantage goals would close the scoring.  Duke would win the contest, 15-8.

Duke was led by Class, who had six points on the day (give goals, one assist).  The visiting Blue Devils will wait to meet their opponent as the NCAA Tournament opens next week.  Cal Dreath and James Burr both would have hat tricks to lead the Terriers.