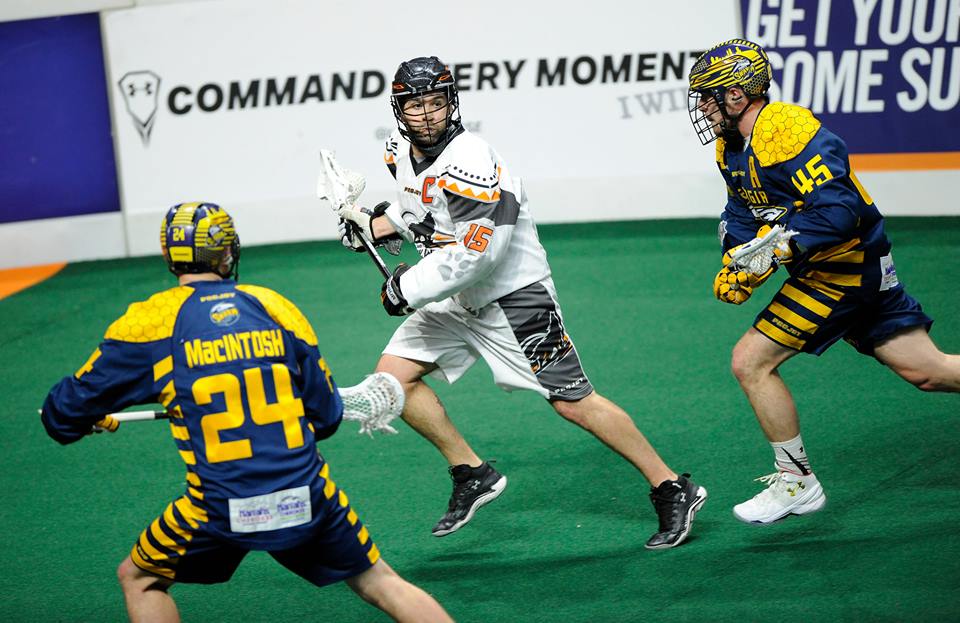 Early spring temperatures this week on the eastern seaboard have NLL teams looking towards playoff runs and acquiring the tools needed to get them there.

That means trades, and there were two blockbusters this week with marquee players on the move. Who knows what the next two days could bring?! But there is plenty of time before the league’s March 19th trade deadline.

Monday, Dan Dawson was shipped to the Saskatchewan Rush from the Rochester Knighthawks. Wednesday, an even bigger bombshell was dropped as the Buffalo Bandits announced they had acquired two-time league MVP Shawn Evans from the New England Black Wolves for Callum Crawford. The teams also swapped picks – Buffalo receives a fourth rounder for a second rounder, both in the 2019 draft.

Crawford and Evans are pretty equal players. This trade appears to be all about personality fit.

Being traded isn’t necessarily a bad thing. Most of the league’s stars or former stars have played on more than one team. John Grant Jr. played for Rochester for many years before heading to Colorado. Colin Doyle spent three years with San Jose between stints with Toronto. And Dawson is now on his sixth team, and nobody will ever argue his greatness (go ahead, I dare you).

So while it’s possible that one or both of Evans and Crawford wore out their welcome on their former teams, it’s just as likely that with changing team dynamics, trades became necessary. With expansion coming next year, the face and shape of the league will change. Talent will be less concentrated. Teams won’t be the same, so moves need to be made now to avoid big damages next season.

So, did anybody see these particular trades coming? In both Dawson’s and Evans’ cases, there were signs pointing to their moves.

Dawson was a healthy scratch two games in a row after missing one game for personal reasons. The Knighthawks, who had been struggling, won all three games with Quinn Powless in the lineup in Dawson’s place. Rochester’s focus seems to be on developing their young talent and at 36, though he is still one of the best players in the league, Dawson’s career could be winding down. Dealing him to the Rush gives him a chance at winning another championship (or two, or three, if the Rush continue their dominance). He’s a great player and a great leader – he just isn’t what the Knighthawks need right now.

Earlier in February, Evans was stripped of his captaincy. “Stripped” may be a harsh word because we don’t really know what happened in New England. He could have given it up voluntarily (although I can’t begin to guess why). All the Black Wolves divulged was that they wanted to make a change, and Kyle Buchanan ended up with the C while Evans wasn’t even granted an A. He had no letter at all. It either didn’t affect him or it lit under a fire him as he scored five goals in that night’s 18-13 loss to the Bandits (who can tell when five goals is normal), but for a player of Evans’ calibre, it’s an odd move. Of course, points don’t always equal leadership capabilities, but he’s worn an A for the Peterborough Lakers for several seasons and was appointed captain early on in his tenure with the Wolves. It’s not like he was a new captain that couldn’t handle the pressure. If something happened to put him on the outs in New England, it happened fast. The ‘Wolves had just extended Evans’ contract through 2020 in December. Maybe they knew they were making him available and wanted to give the team time to adjust to Bucky’s leadership.

“The Black Wolves will always be grateful to Shawn Evans,” Lisk said. “When we made the trade for Shawn before our second year at Mohegan Sun, he instantly gave us that ‘It’ factor. He led us to two playoff appearances, and provided us with many memorable moments. It’s always hard to part ways with a player, and a person, of Shawn’s character.”

Being a Bandit isn’t bad news for Evans, though, not by a long shot. He joins the east’s number one team. They crawled out of the basement without him, so just think what he can add to them now. He’s also closer to his home and work in Peterborough. Fewer flights mean more time for family. Bandits fans, despite their initial misgivings, are going to love having Evans on their team. He’s the most passionate player I’ve ever had the pleasure to watch.

Evans and Crawford are both righty forwards and while Evans is the flashier player, the one that racks up more awards, Crawford’s career numbers aren’t too far off of Evans’. With 829 points in 180 games, Crawford has averaged 4.6 PPG; Evans 5.2 PPG with 1061 in 204. Crawford’s goals per game average is 1.6, whereas Evans’ is 1.9. Both players entered the NLL in 2006. This will be Evans’ fourth team, and Crawford’s seventh. They share the record (with Josh Sanderson) for assists in a season with 83.

It’s a good trade for both teams. Buffalo gets the two-years-younger Evans, while New England gets someone who can potentially mentor younger players like JP Kealey, who is ripping up the Arena Lacrosse League with an average of 9.8 PPG while he waits on the ‘Wolves practice roster.

Time will tell, but looking at these trades head on, there are no losers. Each team made a move that was right for them and their future. In the end, that just makes the NLL a better league to watch.