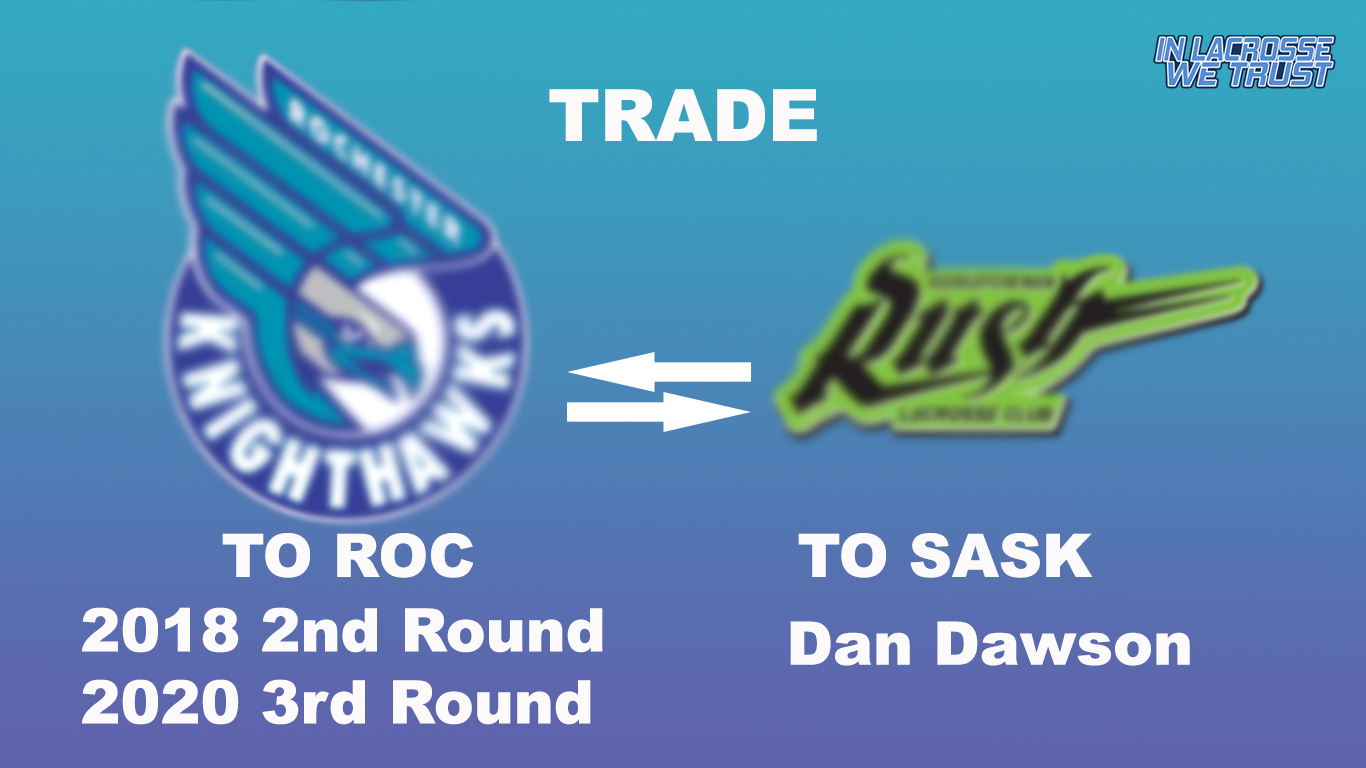 On Monday, the Rochester Knighthawks shocked the National Lacrosse League as they dealt Dan Dawson to the Saskatchewan Rush for a pair of picks. The Knighthawks will receive a second round pick in 2018 and a third pick in 2020 in exchange for Dawson.

Dawson has been a workhorse for the Knighthawks after joining the club in 2013 after a brief stop with the Philadelphia Wings. Prior to that he played in Columbus, Arizona, Portland and Boston. In 75 games with the Knighthawks, he averaged 5.76 PPG with a total of 423 points including 132 goals and 291 assists. He has 26 points this season.

The 36-year-old Oakville, Ontario native will now play even further from home as he sets to join the Rush. The Rush have had the exact opposite rhythm of the Knighthawks this season as they sit atop the standings with a 9-2 record, the only team to have clinched a playoff spot.

It is unclear what sparked the trade but with Dawson’s age climbing, the chance to win another championship before retiring could have played a factor in the DNA of this deal. Also a factor may be the Knighthawks’ recent success without him. He missed the February 11th game for personal reasons, and the 2-6 (at the time) team won with Quinn Powless replacing him in the lineup. Dawson was a healthy scratch the next two games, also wins, and against the league’s best team in the Rush, and the hottest team, in the Bandits for a 3-0 record without the superstar. The Knighthawks are still four games out of first place but are slowly climbing their way back to a .500 record.

With the acquisition of Dawson, the Rush now look absolutely unstoppable as the combination of Dawson, Mark Matthews, Chris Corbeil and Curtis Knight will be a handful for teams to contain. Dawson brings a veteran presence along with a strong defensive-minded lacrosse IQ and the willpower to drop the gloves and protect his teammates. He’s a leader’s leader.

This trade worked out well for both teams as the Knighthawks, who are focusing on developing young talent, will receive two draft picks. The 2018 second-round pick will be exceptionally valuable as the Knighthawks continue to rebuild, and picks will be a premium with two more teams drafting this year.

The Vancouver Stealth will have their hands full as they will be the first team take on Dawson and the Rush on March 3rd at Sasktel Centre. The Knighthawks will need to rally around the new absence as they have a repeat matchup with the Georgia Swarm on March 10th.