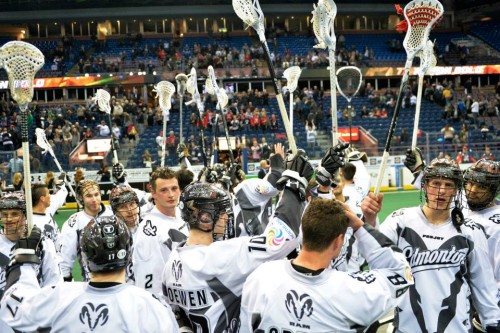 Just six short weeks ago the Edmonton Rush celebrated their first NLL Championship in franchise history. The team along with their small but faithful fan base was finally being rewarded for their efforts after a 10 year journey to finally lay claim to the Champion’s Cup.

Today, that same fan base will not enjoy the opportunity to witness the raising of the 2015 Champions banner to the rafters at Rexall Place. Instead they are left with a bitter taste in their mouth as team owner Bruce Urban packed up and moved the team to Saskatoon to effectively become the Saskatchewan Rush.

It is a well known fact that the province of Saskatchewan only has one professional sports team to support, the Saskatchewan Roughriders, and that the average sports fan in that province is starving for more sports.  Saskatchewan has been trying to lure an NHL franchise for decades, but failed to do so because they are considered a very small market and could not support a team over a long period of time.

Enter the NLL’s Rush into the picture, and you have instant success. The combination of the starving sports fans and an owner looking for immediate return on his investment is a perfect short-term marriage. Much like many of the marriages that take place in Las Vegas. It might seem like a great idea at first, but when the honeymoon phase is over the struggles of reality begin. To make it a success, Bruce Urban must not market his team like he did in Edmonton or else he will be looking to relocate once again in the future.

The City of Edmonton also needs to shoulder the blame. When the city negotiated a deal that would see the Oilers Entertainment Group take over the running of Rexall Place and the new Rogers Place, the Rush were not considered in the talks that would ultimately decide their future. The Rush were simply a tenant. They did not benefit from any of the ticket tax money that the Oilers and Oil Kings received. Even though Bruce Urban did not have this benefit, he still managed to pay all his bills.

I believe a better effort could have been made to make lacrosse stay in Edmonton, but greed by both sides failed to accomplish what all Edmonton lacrosse fans dearly wanted.

It’s a shame that the Rush have left town. Both the franchise and the fans experienced the growing pains of building a championship team. From the losing seasons with Jimmy Quinlan to the Champion’s Cup with Mark Matthews it’s been a most memorable journey.

As for the raising of the 2015 Champion’s Cup banner, Edmonton fans can only hope it will be broadcast for all to see, and maybe someday Edmonton will get another team to call their own and get a chance to see the banner ceremonies in their own building.