Some may be asking “What is Fann Cup?”  Fann Cup is an event played by the fans of the game of lacrosse.  Many of the teams take their names and/or colors from the teams that represent their hometown. Whether it is a team from the National Lacrosse League, or the Major Lacrosse League, the colors and teams are represented with pride.

Buffalo Brigade (Bandits), Minnesota Stingers (Swarm), Philadelphia Wingnuts (Wings), Toronto Roadies (Rock), Rochester Krewhawks (Knighthawks), Chicago Cloverz (Shamrox) and this year’s host, the Spirit.  We also have a team of women, called the Lacrosstitutes (Tutes) and a team called the Spirit.  This is a team made up of extra players from the other teams.

( www.fanncup.com ) It all started after a pickup lacrosse game in Toronto over a few pints.  A group of Rock fans decided it would be a good idea to challenge fans from the Knighthawks to a friendly game of lacrosse.  In a few short weeks the inaugural Fann Cup was played, Toronto hosted the event and defeated a team made up of fans from Buffalo and Rochester.  On that day Anthony Cosmo was the guest referee. They even had players and coaches in attendance: Pat O’Toole, Casey Zaph, Steve Penny, Corey Quinn just to name a few.

From their it started to build and build.  In the second year Buffalo and Rochester had their own teams to go with Toronto, but Philadelphia was added and in their first year they brought the cup to Philadelphia.

In 2005 Toronto added two more teams to go with the four in the mix.  2006 saw the birth of the Philadelphia Rage, giving the city of Brotherly Love two teams.  In 2007 Chicago joined the party.  In 2010 an expansion boom happened.  The Minnesota Stingers, Boston Brawlers and Team Spirit joined this party.  Now as we hit Year 14, 10 teams will be in the mix with the newest addition being the Wolfpack.  In the past 13 years the Fann Cup has raised over $50,000 for numerous charities.  Alex’s Lemonade Stand, Laurel House, Carlys Club, American Diabetes, Multiple Myeloma Research Foundation to name a few.

This year we have two charities.  The first is Room2Smile, which was founded by Brandon Spillet and creates personal care packages with comfort items for people who have been recently diagnosed with cancer. The second is Central New York based Positively Pink Packages, who provide care packages and educational resources to those diagnosed with breast cancer.

The money is raised through player fees, auction items donated by players, professional sports organizations, and even the National Lacrosse League. The event is free, but there are donation jars for spectators to make a donation.  The “official” festivities usually start early Friday evening with a registration party.  This year with the tournament being in Syracuse, the participants will have the opportunity to visit the Onondaga Nation (People of the Hills-www.onondaganation.org); some may even take in a playoff lacrosse game over at their arena on Friday night.

One of the long time participants Matt Schwarz had this to say about the upcoming weekend.

“This event is unlike any in professional sports. No other league has fans get together, in the offseason no less, to compete for bragging rights and raise money for charity. This event draws people from all over the National Lacrosse League from current cities such as Buffalo, Rochester, and Toronto; to cities that no longer have teams such as Chicago, Minnesota, and Philadelphia. That is the staying power of this game. That is why we are fans of this league.

“Yes, we hate each other for 2  1/2 hours on certain days during the winter, but at all other times we are friends. This is why people from Philadelphia, former Wings fans, can join and play on teams from Minnesota, Buffalo, and Toronto. It is why a conglomeration of fans from various teams can come together and form their own team. It is why people travel hours, sometimes by plane, to play.

“They come to see the other fans of the NLL, they come to see friends that have become family, they come to play lacrosse. Lacrosse is the game we enjoy watching, and enjoy playing. There is no greater sport, and it truly is an honor to play in this event every year. I look forward to seeing you all on Friday.”

Some of us will arrive on Thursday, but a majority will arrive on Friday, as everyone gets a chance to catch up on the past years’ doings, sharing stories, etc.

But this year we will be playing with a heavy heart.  Long time goaltender Frank Menschner (Wingnuts) passed away on May 15.   Frank was a staple in lacrosse in the Philadelphia area.  Frank was the President of the PBLA for the last 28 years.  Its obvious Frank loved the game of lacrosse.  He won six PBLA Championships, was a member of the 1980 US Box Lacrosse Team, and the 2007 US Indoor Box team.

Besides traveling to Baltimore, New York, and Canada, Frank made 15 appearances in the annual Ales Hrebesky Memorial Tournament in Prague.  Their memorial to Frank is here: www.ahmemorial.cz – Til Death Do Us Part.

Frank loved to play in this event and was very easy to get to know.  His lacrosse stories, his wacky sense of humor and his one-liners will be missed this year.  There will be stories told about Frank during this weekend as we sit and laugh, but we all know he will be looking down on us this weekend.

When I first started playing in this tournament in 2006 I thought I was over my head, thinking “what am I doing?”  Frank saw I was a bit upset and said, “Go out and have fun, that’s what this is about.”  Below is the logo that will be worn by members of the Philadelphia Wingnuts in memory of Frank Menschner. 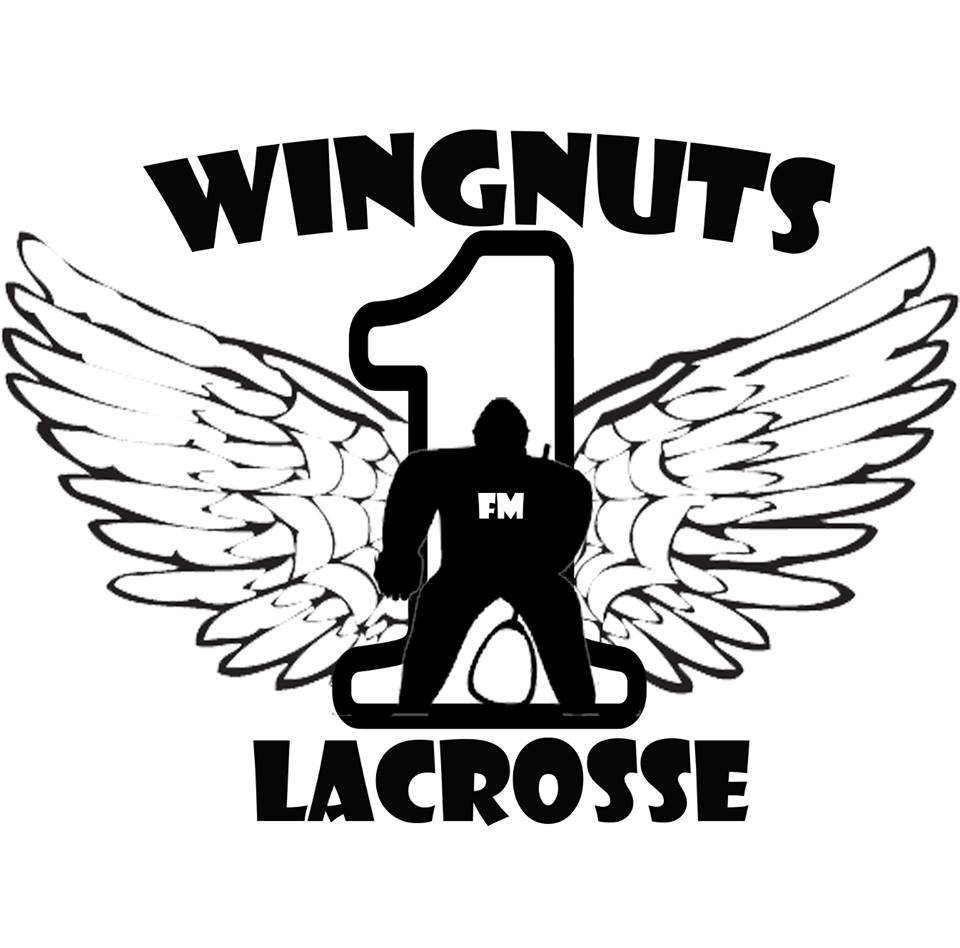 When the sun rises on Saturday morning the anticipation is at its highest peak.  Teams will line up for the Canadian and American National Anthems and the games will begin. There will be no crushing hits, no Air Gaits.  Very light contact is allowed and stick to stick contact.  Wrap around stick checks are not allowed, and neither is fighting.  You fight in Fann Cup, you are thrown out permanently.  Will tempers flare? Probably, but for a brief moment, after all it is a competition, and everyone wants to be the champion of the tournament.  All that is required to play is a helmet, gloves and stick—if under 18 you must wear full gear.

Once all this is completed you have the banquet on Saturday night where all will gather for a well deserved meal.

Awards will be given out by each teams’ captains.  Another team award will be presented.  The Spirit Award.  This was introduced in 2010 by the Philadelphia Rage.  The award is presented to the team that has the most fun throughout the day’s events, demonstrates sportsmanship to fellow competitors.  The only teams not eligible to win would be the two teams who play in the Fann Cup Final.

During the Banquet on Saturday night their will be items to bid on, maybe a game or two that some may play to donate money.  But we have one big game everyone loves, The Wheel of Crap.  For $1 you get to spin the wheel and win some crap.  Items can range from things you see in your local dollar store, to something people have around the house.  All the proceeds from these two games will go to the charities as well.

No one will want the weekend to end, as again many will stay awake ’til it is time to depart for home til next year.

One thing is for certain, there will be pulled muscles, a couple bruises by an errant stick or getting hit by a ball.  The chant of OW…OW…OW…OW will be heard all over Syracuse and maybe back to everyone’s home town.

Everyone will return home a champion for their efforts this coming weekend.  They know the goal was accomplished.  Have fun, raise money, play a game we love, and make friends.

Once we arrive home stories will be told to friends and family, and the anticipation starts to build as to where Fann Cup 2016 will be.  And the Fann Cup motto will be repeated over and over:  “WIN OR LOSE…WE DRINK THE BOOZE.”

I do this for the love of the sport.  I always wanted to play the game.  Now, not only am I playing a game I love, but I am raising money for charity, making a lot of fantastic friends.  I also have the honor of playing along side of my daughter Samantha, and now this year my son Christopher will participate.

All week on social media you can see everyone sharing stories of the past years, posting pictures etc., which makes the anticipation build more rapidly.

Travel safe my lacrosse family, I will see you this weekend.  We all have a lot to catch up on!!

Past Winners of The Spirit Award.