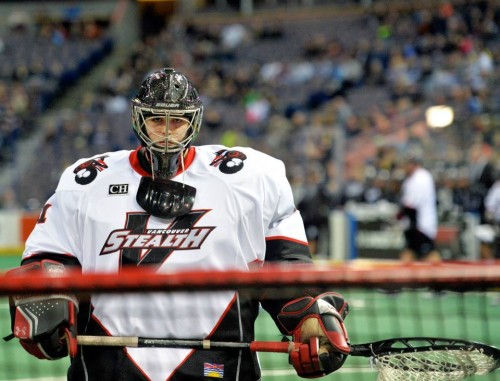 The Vancouver Stealth struggled defensively at times last season, and they’ve made the effort to improve with the signings of Travis Cornwall, Ian Hawksbee, and Jeff Moleski. However, their roster took more of a hit on the defensive end of the ball this offseason when goaltender Tyler Richards announced he would be retiring.

The Stealth have leaned on Richards to lead them to a championship and he has been with the Stealth since 2008. Eric Penney, who they acquired in a trade with Buffalo last year, stepped in at times last season and played well, and they’ll need him again if they want to contend.

Of course, they have young goalies Adam Shute and Cody Hagedorn in the mix moving forward. But Penney has emerged as a legitimate option to become an NLL starting goaltender in a league where young goalies often do not find success.

That success has yet to be found in the NLL for Penney, who saw time in all 18 games and he put up a goals against average of 14.74. He played in 346 minutes as he emerged as the Stealth primary backup when Richards went down with injuries.

“We have tremendous confidence in that group without a doubt.” says general manager Doug Locker. “We have been impressed with what Eric has done both last season and over the summer, and feel he is one of the top young goalies in the game.”

Penney’s best game in the NLL came on Apil 12 when he defeated the New England Black Wolves, surrendering nine goals and making 59 saves. He would typically face an onslaught of shots from opposing offenses while the Stealth defense struggled.

The 22 year old Penney has starred this summer with the New Westminster Salmonbellies of the Western Lacrosse Association where he has led the team to the WLA finals against the Victoria Shamrocks. Penney leads the league with eight wins and a save percentage of .829. He is third in goals against average behind just Stealth teammate Hagedorn and Tye Belanger.

Penney, who holds an 8-3 record in the regular season, has led his team to a 4-1 playoff record where he has a goals against average of 8.40. That series is far from over, but Penney has continued his stellar season into the playoffs.

It looks like Penney has a chance to be a starter with the Stealth in 2016 despite some competition. Young goalies have struggled in the past in the NLL, and the former Vancouver starter Richards was one of the first modern goalies to find success at a young age. In a league where rookies and second year players such as Evan Kirk and Dillon Ward grabbed starting roles, Penney has paid his dues and now has a chance to prove himself in training camp.