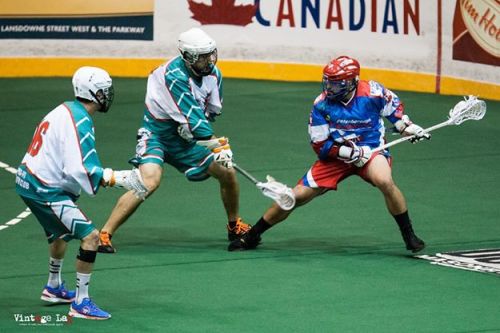 The Peterborough Lakers and Six Nations Chiefs will do battle for the second consecutive year in the MSL final. The winner will represent the East at the 2015 Mann Cup.

The Chiefs finished off the Brampton Excelsiors in five games, while the Lakers took care of the Oakville Rock in five games as well. 2015 marked the first playoff appearance for the Rock franchise since moving to Oakville, as well as their first playoff win in game three.

While both Oakville and Brampton started the season off poorly, they came on in the latter half of the season and proved to be tough tests for the league’s superpowers.

The Lakers Curtis Dickson spoke of the Rock’s surge after the series had ended.

“We knew it wasn’t going to be easy,” he said. “They started off 0-7 and we knew they were a better team than that. They were missing guys to the NLL and they finished strong down the stretch and they have a good team, they have a great goalie in Rosey, and they got a great offense, they got some serious firepower in the lineup. Kudos to our defense for holding them to three tonight, that was unbelievable and this is how we want to be playing down the stretch here into the finals.”

“Defensively [the Lakers are] very good as a unit and they give Vno (Matt Vinc) the shots that he wants to see and they play a system and they try to dictate what you do and they do a good job of that,” Berg said after game four.

Berg broke out offensively for five goals in game four, but was held pointless in game five.

The Lakers are looking forward to getting the final series started, and are hoping for a better outcome than last year, when Six Nations won in seven games, the decision only made in the third period of the final game. It was an intense series and this year will be no different.

The Chiefs won the season series 3-1 but the Lakers’ one win was a huge emotional boost for the team in a 14-13 win. Brampton was able to beat the Chiefs at the ILA during the playoffs, so the Chiefs are not perfect at home, a fact the Lakers will take advantage of.

Captain Scott Self is preparing his teammates for the Chiefs aggressive style of offense.

“We gotta play good as a unit because they have a great offensive unit,” he said. “It’s going to be tough for our offense against their defence so we have to make sure we make it really tough on their offensive players as well, and you might see a lot of 7-6, 8-7 games in the series. We’re definitely feeling good, confident. I feel like we’re we’re coming into our own, we’re in a groove. Six Nations presents a whole new set of challenges and we are going to have to make adjustments on the fly. They know what we do and they’re going to pull the same stuff so we just have to be on our toes and ready to adapt.”

Game 7 – To Be Determined based on Minto Cup schedule