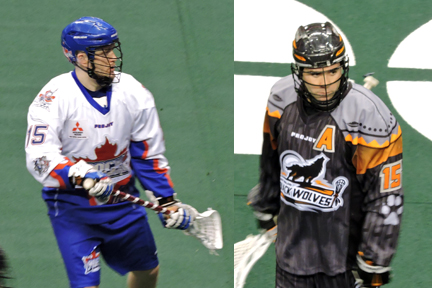 Lacrosse is a tradition for the Evans family; it has been for many years. Their name is synonymous with excellence in the sport. It would be faster to list the family members who haven’t played at high levels and left their mark on the game.

The current generation is the best one yet.

Of course there is Shawn, who stars for the New England Black Wolves; his most recent record (he’s set a few) saw the reigning NLL MVP achieve four consecutive 100 point seasons. In his 11 seasons in the league, he’s accumulated 906 points in just 177 games, and he’s only 29.

But now there is also Turner, a cousin of Shawn’s. At 22, Turner is in his rookie season with the Toronto Rock after an impressive career at the Ohio State University.

The two faced each on April 9 as Shawn’s Black Wolves defeated Turner’s Rock 14-10 at the Air Canada Centre. It was the second professional meeting between the two; the Black Wolves prevailed 17-16 in overtime back on Valentine’s Day at Mohegan Sun.

“It was a good moment in Toronto,” Shawn said after the game. “We’ll meet up afterwards and
have a couple drinks together, talk and socialize. Overall it wasn’t the best outcome for them but I thought [Turner] played well.”

There were lots of Evans supporters in attendance in Toronto. Both men estimated 20-30 friends and family drove up to see them play against each other.

“It was good to have them come support both of us for the game,” Turner said.

The pair kept pace with each other in the first quarter; Turner assisted on two of Toronto’s first three goals and scored the other. Shawn had three assists. As he is wont to do, Shawn kept up his pace and ended the game with two goals and five assists. Turner added a third assist for a four point game, his best yet in the NLL.

“He’s a great ball player, it’s good to see that he’s getting more floor time and more touches with the ball,” Shawn said of Turner. “He’s a special player. When he gets the ball in his stick he makes his teammates better around him. It’s always a little bit emotional seeing him out there, seeing him play and then seeing him in the big leagues. I know he probably thinks it’s something special too.”

Turner said that facing his cousin didn’t add any extra motivation to his game.

Turner was a healthy scratch early in the season while Toronto tried to find its footing. He’s now played in 11 games and has eight goals and ten assists.

“It feels good to contribute to the team,” he said. “I think I had a slow start to the year and right now I’m finding my game with this team, so it feels good in that way but it’s always tough to get a loss so it’s a little bittersweet.”

Rock head coach John Lovell is pleased with Turner’s progress and compared his development to that of Rob Hellyer, Toronto’s leading scorer who took about four years to develop into an elite player.

“It’s just a case of him being a little bit more comfortable and playing the game a little bit harder; it takes time for guys,” Lovell said. “…He’s going to be a player in this league and we knew it was going to take time.”

Because they both play offense, Shawn and Turner will rarely be on the floor together when they play each other.

“The special thing is that we’re both offensive players so we’re not really battling with each other and against each other all game long,” Shawn explained. “I have the utmost respect for Turner and what he does and I know what he brings to the game of lacrosse and his skill level so it’s great to see him taking off.”

Turner and Shawn play senior lacrosse together in the summer for their hometown Peterborough Lakers of Major Series Lacrosse. They are also joined by Shawn’s older brother Scott, an NLL veteran himself. It’s a treat for fans in Peterborough to hear goals announced as “Evans from Evans,” and this past season there were even two or three “Evans from Evans and Evans” goals.

Scott tweeted out support for his family prior to Saturday’s game:

Both players wear #15 for their respective teams, while Scott wears the number for the Lakers. Their dad wore it before them. Maybe someday one of their kids will wear the number; lacrosse, after all, is the family’s past, present, and future.