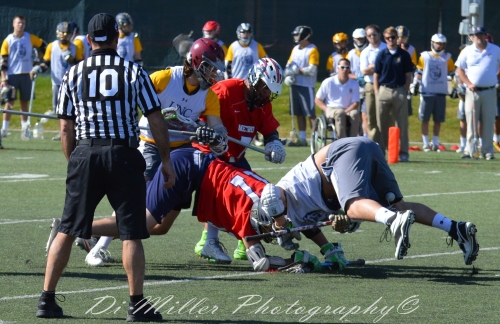 On Saturday October 18, Metropolitan State University Roadrunners (3-0) went head-to-head against their inner-league RMLC rivals the University of Northern Colorado Bears in Greeley.  The last time these two teams met during the regular season, UNC took down MSU by the score of 22-6.  So of course MSU wanted revenge.  Over the summer MSU has done some excellent recruiting and it’s paying off.  So far this fall season, they have played some tough games and come out on top in each of them.  This game was no different.  UNC wanted the victory, but it didn’t come easy and they got it by the score of 8-6.

UNC came out scoring first and they were stoked.  The MSU players weren’t going to let one goal off the opening face-off dampen their spirits.  They played hard throughout the entire game, but ground balls seemed to get the best of them.  The field was in terrible condition, not a good scenario for getting ground balls.  Both goalies played hard; and the defense for each team was stellar.

In the faceoff category, UNC definitely controlled winning the majority in each quarter, but it’s obvious with the new NCAA faceoff rules, it’s creating a real problem for the faceoff guys who used to be able to clamp down on the ball and lift it with their stick sending it to one of the wing-middies to gain possession.  We saw numerous faceoff violations on both teams; and a lot of missed penalties by the referees against each team.  As more penalties occurred, the most serious being numerous slashes to the helmets, tempers were flaring.  MSU wasn’t going to go down without a fight.  At half-time the score was UNC 6—MSU 5.

MSU Head Coach Aaron Meyer had a heart-to-heart with the players, reminding them of the missed opportunities on ground balls; not following the plays they had worked so hard on in practices; and moving the ball around.

In the second half, MSU played a much stronger game, they were getting off good passes, but UNC was getting their slides on defense and keeping the top scorers for MSU from hitting net.

There would only be three more goals scored for the remaining two quarters.  UNC would get two to MSU’s one.  Although MSU had gotten the ball on the final faceoff, they couldn’t capitalize and gave up possession and lost the opportunity to win the game.  Final score UNC 8—MSU 6.

The only players to score for MSU were Drew Lazar #18 midfielder with two; Max Rogers-Jackson #9 midfielder, Sam Houser #17 midfielder, Josh Davis #2 attack, and Mitch Larson #3 midfielder would each score once.  MSU would only have 22 SOG and 22 GB for the entire game.

MVP of the game goes to Bryson Olejnik for his stellar performance in the second and third quarters holding UNC to only two goals in the second half.

It will be an interesting game when the college season starts in the spring of 2015 and each team will have their full rosters.  That’s going to be a great game to watch and MSU will definitely have a much stronger team than they have had over the past three years giving UNC a run for their money.