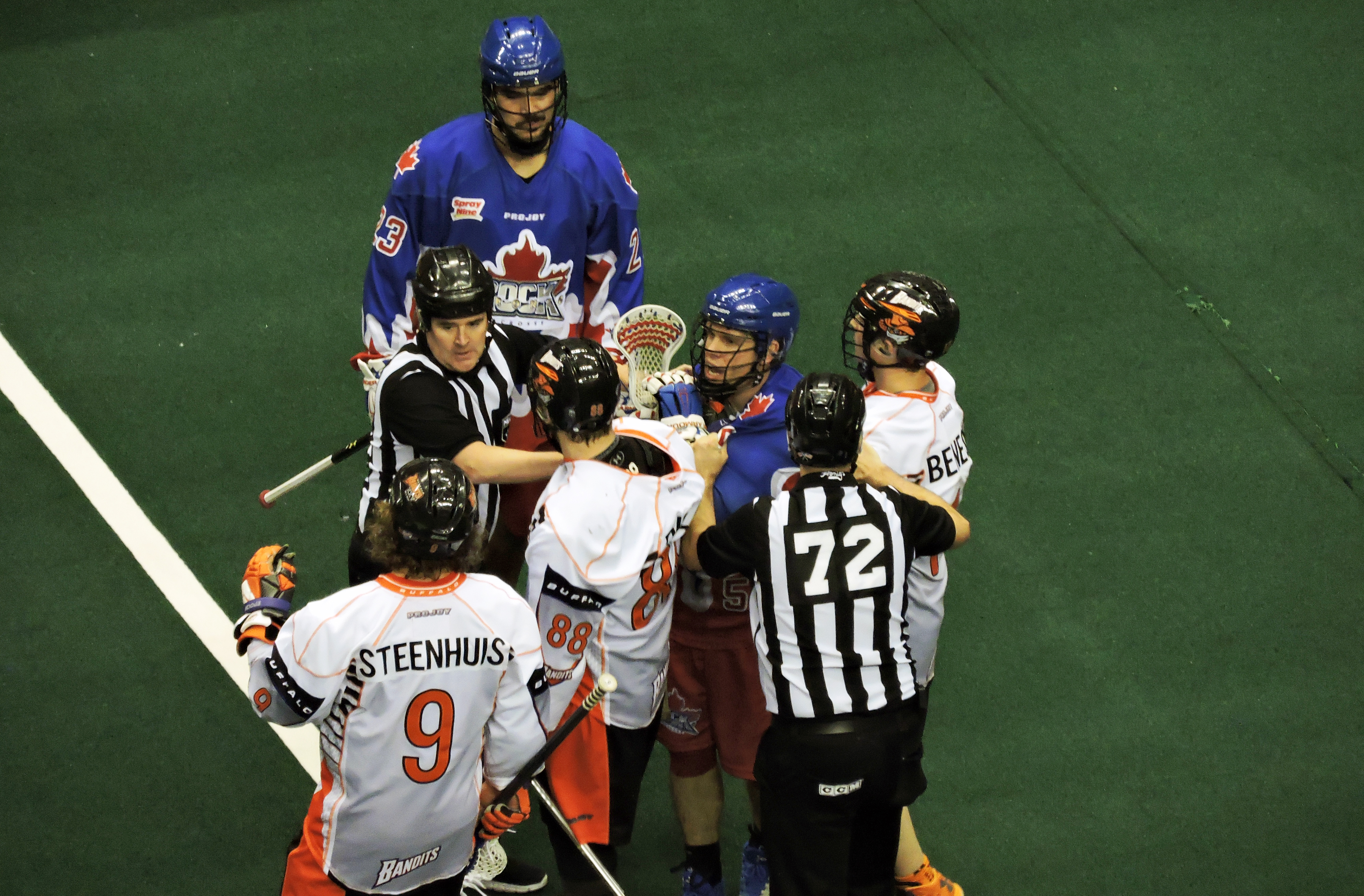 The first of four meetings between geographic rival Buffalo Bandits and Toronto Rock on Friday night at the Air Canada Centre did not disappoint. An energetic effort from the Rock saw them hammer the visitors 18-10.

After a defensive battle versus Rochester last week, the Rock’s offense lit it up versus Buffalo. It wasn’t even Toronto’s highly-touted transition game, which won them their first two of the season, that made the difference–their five-on-five play finally stepped up and stole the show.

Dan Lintner, back in the lineup after serving a one game suspension and sitting a second game as a healthy scratch, had a hat trick and an assist.

He was happy to get the monkey off his back, picking up his first points of the season.

“We have a bunch of unreal lacrosse players in that locker room. It’s not a knock on me,” Lintner said of his healthy scratch status from game three. “Obviously you want to play but you’re not mad. You’re a little disappointed but we have six or seven guys up there that are battling and doing their job and whenever I get my opportunity I’ll take my chances and make the best of it.”

“We have big expectations for Danny and he’s going to be a big part of our offense and you saw that tonight,” head coach Matt Sawyer said. “Sooner or later the game at this level is going to slow down for him.”

Lintner assisted on the first goal of the game before picking up his own on a low bouncer 1:35 later.

The Rock, shocked in their last game out of the gate, built a 2-0 lead early in the game. The Bandits were able to tie the game but Jesse Gamble accepted a pass from Brad Kri who fought three defenders off a faceoff to beat Anthony Cosmo at the 9:16 mark of the first quarter. It was downhill from there for the Bandits.

The Bandits went on a four goal run in the fourth quarter to catch up at 15-10 with five minutes to go, and knowing how momentum plays a role in lacrosse, some Rock fans were a little anxious. Toronto, however, replied with three of their own to seal the deal. Nick Rose made 38 saves in the win.

Billy Hostrawser fought Steve Priolo during a preseason game, but much to the fans dismay there was no rematch. In fact, there were no fights at all, odd for a game featuring the two rivals. Buffalo just didn’t have the energy throughout the game as they concentrated on stopping the bleeding.

“It’s another step up,” Schreiber said about the rivalry. “The level of intensity is stronger. Those rivalry games are great and that’s a big momentum swing for us not only in the standings but as a team attitude-wise to get this win.”

“It’s always a big one against the Bandits,” Lintner added. “It’s a nice matchup and if you’re not ready to get up for that one I don’t know what you’re going to get up for. We always look forward to playing them.”

Schreiber’s second goal 4:07 into the second quarter had jaws dropping throughout the ACC. We see players fly over the crease in every game, but for such a new player to pick up such a great skill and execute it with Curtis Dickson-like precision has people taking notice. Schreiber dodged Kevin Brownell to the right of the net and flew like he was in slow motion, letting the ball go at just the right moment to beat Cosmo.

“You guys only see half of it during the games, in practice he does some incredible things,” Leblanc marvelled. “It’s really good for the sport as well, bringing in American guys that have played field lacrosse predominantly their whole life and being able to transition this well into the box game is a real step in the right direction for us.”