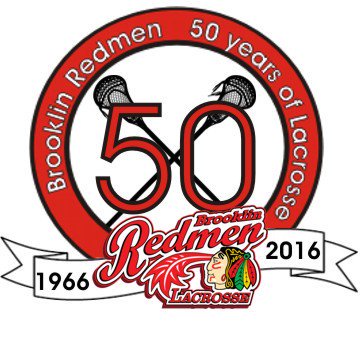 The Brooklin Redmen have always been a lacrosse club built around home grown talent, but the 50th edition of the club will have an even more local flavour with 20 of 25 players hailing from the Durham Region.

This also could be the strongest team the Redmen have assembled since the 2000 Mann Cup winner, the last time Brooklin were crowned Men’s Senior A Lacrosse National Champions.

“I really want these young guys to win a Mann Cup here,” said head coach and general manager Wayne Colley. “Most of them have won Minto Cups here in Whitby and have had major success in the professional league and that all comes into factor in what we are trying to do here in the Brooklin Redmen’s 50th season.”

Shayne Jackson and Curtis Knight return to the Redmen while Durham region products Austin Shanks, Ryan Keenan and Matt Hossack will join Brooklin for their MLS rookie seasons. Jackson, who is coming off a career year in the NLL netting 83 points with the Georgia Swarm, is excited to be back playing lacrosse in the arena where he made great junior lacrosse memories.

“My last year of Junior ‘A’ we won a Minto Cup championship with a lot of guys here,” said Jackson. “To all be back here this summer in this arena it’s pretty special. We are excited to get going and I just can’t reiterate enough how fun it is to play with these guys again.”

NLL standout Mark Matthews has also confirmed that he will play for the Redmen in 2016, but the amount of games he will play is uncertain.

“It should be a fun summer,” said Matthews. “I’m pretty busy so we’ll have to figure out what games I can come back for but all in all it’s pretty nice to play back where I won a Minto Cup with the Warriors.”

The Redmen also made a pair of trades earlier this month in an effort to bring more Durham region natives on board. Brooklin acquired Mitch Wilde from the Cobourg Kodiaks for Mike Triolo and Dustin Dunn as well as a second-round pick in the 2017 MSL draft and a third-rounder in 2018.

“The group we have now has chemistry and they’ve won together,” said Colley. “We’re going to have an exciting team to watch this year with guys like him on the floor.”

Colley wasn’t done there, grabbing Whitby Warrior product Alexis Buque from the Brampton Excelsiors for Mike Teeter and Kyle Aquin. Teeter finished second in team scoring with 48 points in 17 games. It sounds like Buque will most likely stay out west this summer and play his third season with the New Westminster Salmonbellies. A high price for a goaltender that may not play this season, but it could turn into a risk that may payoff in the future.

And of course, Shawn Williams is returning to the Redmen for at least one more season. The 41-year-old is 20 games away from tying John Fusco’s record for most games played in Redmen history. Williams is expected to play as a depth veteran player, but it wouldn’t come as a surprise if he continued to put up solid numbers. Last season, Williams led the team in scoring netting 16 goals and 42 assists for 58 points in 17 games. The 22 year veteran is just 28 points away from tying John Davis for second in all-time career regular season Senior A points.

Brooklin returns a strong defensive core with the likes of veterans Derek Suddons, Steve Priolo and Dan Ball accompanied by athletic defenders in Sheldon Burns, John Lafontaine, Adrian Sorichetti, Graeme and Matt Hossack and the newly aquired Wilde. The Redmen will have one of the most dynamic defenses in the league with the capability to push the ball up the floor and being able to lock down in their own end.

Mike Poulin and Zach Higgins will share the cage for the Redmen in 2016. Higgins and Poulin had nearly identical minutes in 2015 with 511 and 513 respectively. With a strong defense in front of the tandem, it should make life much easier for these two very capable tenders.

The Redmen will be without seven players for the start of the season with the Buffalo Bandits and Saskatchewan Rush in the NLL Championship. Curtis Knight, John LaFontaine, Adrian Sorchetti and Matthews are looking to help the Rush organization win their second straight NLL Champion’s Cup title while Mitch Wilde, Steve Priolo and Kevin Brownell hope to bring the Buffalo Bandits their first league championship since 2008.