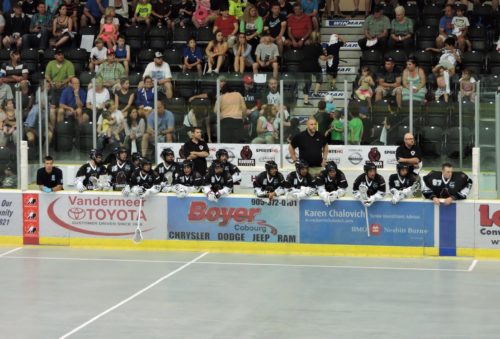 The game result wasn’t what the Cobourg Kodiaks wanted but their debut at the Cobourg Community Centre was a night to be remembered. A crowd of 1217 new and seasoned lacrosse fans took in the home opener for the newly relocated MSL team as they lost to the Oakville Rock 10-5.

Formerly the Kitchener-Waterloo Kodiaks, the team struggled with attendance and community support at the Waterloo Rec Complex. In January, then owner Al Orth moved the team to Cobourg where he sold it to John Webb, Eric Graham, and Chris Galbraith. The Kodiaks had given up one home game in each of the last two seasons as the league explored new markets, first in Kingston in 2014, then Cobourg in 2015.

About 1700 fans took in KW’s game versus Peterborough last June during a minor tournament put on by the Northumberland minor association.

Webb, the team’s general manager, was happy with the home opener although relieved the day had finally come.

“An overwhelming amount of preparation went into tonight,” he said. “We’ve done a lot of work in two and a half months to prepare for this season and it was great to see the players on the floor tonight. The atmosphere was great, we had just over 1200 people so I think the attendance and fan support was great given that it was 30 degree weather. It was a great night to start.”

Unlike some MSL arenas, The CCC is air conditioned so during the summer will be a great place to find refuge from the heat for fans, and should make the players more comfortable as well. That also means fewer stoppages for mopping up a sweaty concrete floor like in Brooklin.

Although the game was advertised as a near sell-out, the crowd was announced at 1217 and there were plenty of good seats available. But if Cobourg only manages to get even half of the attendance they had at their home opener for the rest of the season, they’ll still have the second highest attendance in the league. With such a beautiful facility, though, and a large surrounding area from which to draw fans, expecting 1000 fans a game isn’t a stretch. Cobourg itself has a population of 18,000, but will draw fans from Port Hope and as far as Peterborough or Belleville. The excitement from the crowd lasted all game long, the crowd was cheering and many fans have already purchased sweaters and jerseys that were seen in the stands.

“The atmosphere was great, the crowd was pretty electric and it was really loud in here,” captain Joey Cupido said.

“We played here one game last year and had a great turnout,” veteran Derek Searle said. “Tonight again, the fans stayed all night with us and even when we got down they were still cheering loud for goals and things like that so I couldn’t be happier to be here. It’s a big change from Kitchener for sure.”

Compared to K-W, fan support and community excitement is high in Cobourg and the players have taken notice. An arena that’s full of knowledgeable, cheering fans is a place players want to be.

Cupido said playing in the CCC makes for an easier game than in KW.

“The setup’s a lot better,” he said of the arena itself. “The atmosphere is a lot better, it’s a lot easier to get motivated. The crowd really gave us some energy especially early in the game. It was a lot more fun, and hopefully we can sustain that all season, hopefully we can keep that up but it was definitely a lot of fun playing here.”

Webb said community support is high and the town has made a commitment to making the Kodiaks a success.

“The community support has been amazing,” he said. “It’s been overwhelming actually, both from the town of Cobourg council right through to our title sponsor Cobourg Nissan and to other big sponsors like Ontario Line Clearing. The radio station’s been supportive, Cogeco’s been supportive, and Ricco’s Bar and Grill, they’ve been very supportive as well.”

Media support for the Kodiaks has been overwhelming as well. In addition to televised home games on Cogeco TV, Peterborough based Extra 90.5 Talk Sports is offering a radio/online radio broadcast for all home games and some away games, something even the Peterborough Lakers don’t have.

The opening ceremonies lasted about half an hour with a traditional drum circle and dances, as well as speeches from Cobourg’s mayor and MSL commissioner Jim Brady.

Cobourg came on strong, scoring the first two goals and taking a 2-1 lead into the second period. Eric Guiltinan scooped up a loose ball and ran down the floor on a two on one and beat Nick Rose stick side for the first goal in Cobourg history. Matt Crough got alone in front of the goal a few minutes later and faked a shot before beating Rose over the shoulder for the Kodiaks second goal. Jeremy Noble scored for the Rock on a power play to cut the lead in half at the end of the first.

Wes Berg picked up a pair of goals to open the second and put Oakville up 3-2. Jason Noble scored unassisted before Berg potted a third for a 5-2 lead. Brendan Thenhaus made it six before Luke Laszkiewicz replied for Cobourg on a tricky bounce shot. Jordan Critch made it 7-3 Oakville but Cody McMahon scored for the Kodiaks on a buzzer beater to end the second period. To no avail, Oakville protested the play in which, with four seconds left, Crough picked up the rebound of Ty Thompson’s shot off the glass and quick-sticked it to McMahon who buried it a split second before the period ended.

Oakville got three in the third from Jeremy Noble, Glen Bryan, and Berg with his fourth to give the Rock ten. The Kodiaks’ Shayne Adams dove around the crease to put one more past Rose to make the final 10-5.

The game was physical, with the Kodiaks’ Broedie Birkhof spending time in the penalty box in each period. In the third, he checked, slashed, then checked again the Rock’s Dan MacRae. As he was escorted to the box, he called on the Rock bench, resisting the ref, and was tossed for his efforts.

At a whistle with just a few seconds left, Brad Kri and Chad Cummings met at centre and went toe to toe in a spirited bout. It took a little bit for Kri to get his bucket off but he ended up with his jersey over his head as well. They each got a couple of good shots in and Kri was bloodied, but he landed an extra on Cummings as the two tumbled to the floor.

“There were some nerves, first game, guys getting used to playing with each other,” head coach Jamie Kubrick said. “We got caught with penalties. We were in the box half the period, they scored two power play goals, two shorthanded goals. We just got caught. That’s a veteran team against a team full of a bunch of rookies and guys that are playing together for the first time.
We have a good mentality, some really good players here, some really good guys that are team players.”

Oakville is now a seasoned team, not the new kid on the block anymore and they’re out to prove it. They’ve put together an enviable roster that the Kodiaks just couldn’t match. About half the team was playing their first game for the Kodiaks, players having been acquired through trades or signed as free agents. A good chunk of the team plays in the winter for the Durham Turfdogs of CLAX, a step below the NLL. Fans in Cobourg will have to be a little patient as the team looks for its identity.

“With time, we’ll learn how to communicate with each other. We’re still trying to learn each other’s names,” Searle said. “That makes it tough when trying to call numbers out there and
half the guys don’t even know their own numbers. All things considered we came out flying, I thought we had a very good first period and we kinda tapered off there at the end. We got a big one on Tuesday, it’s a huge test for us so we just need to put together a full 60. We were a little hesitant with people trying to find their roles on the team, especially on offense. There was a little too much passing I think, nobody was willing to step up to be the guy yet… Too many guys shooting the ball, a little too unselfish but you can’t be upset with that.”

The biggest mismatch was in net; Oakville started Rose, goaltender for the Toronto Rock, while Cobourg countered with Rance Vigneux, a very capable goaltender for CLAX’s Barrie Blizzard. Vigneux was the star of the first period, making a host of difficult saves and allowing Cobourg to take the early lead, but the young defence just couldn’t hold off the talent on the other bench.

Davide DiRuscio will start the bulk of the Kodiaks games once the Buffalo Bandits finish their NLL season.

Webb remained positive after the game that with some time, the Kodiaks will compete with every other team in the league.

“We’re right back at it in Six Nations on Tuesday,” he said. “Tonight Oakville had their entire lineup, and we didn’t. We’re still missing four or five guys who are either in the NLL or were just unavailable tonight so I think with our full lineup things are going to go the other way.”

Cupido believes the Kodiaks have the talent and desire to beat anybody.

“At the end of the day they’re just names,” he said of the NLL stars the Kodiaks will compete against. “They’re obviously really good players but we have a lot of good players here that you just don’t know yet. We’re going to get better with each game and as guys get accustomed to the pace of play here we’ll be a lot better. We’ll just take it one game at a time and we’ll go on Tuesday and try to build from what we did today.”

The Kodiaks play their first road game Tuesday evening at the Iroquois Lacrosse Arena as they face the Six Nations Chiefs.