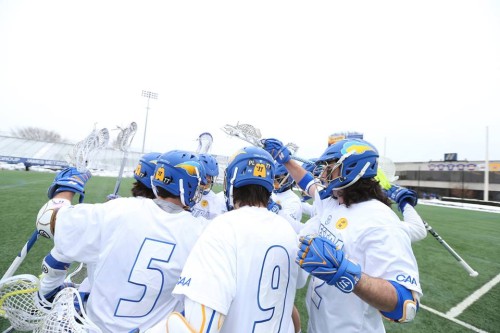 A battle would be the correct adjective to describe the matchup between the UMass Minutemen and the Hofstra Pride. UMass was looking to win their first conference game to stay alive in the hunt for a spot in the CAA tournament while Hofstra was looking for a victory to solidify their spot in the tournament. In the end, it took overtime, but Hofstra clinched their spot in the CAA tournament after missing it the previous season. Head coach Seth Tierney knew the game was going to be tough to win.

“Two really good teams battled it out. A lot was on the line for a lot of teams. They were fighting for their lives, which makes them really dangerous, and we were fighting to punch our ticket to the CAA tournament.”

Hofstra found themselves down 2-0 early in the first quarter, and they responded with two goals by Josh Byrne and Trevor Kupecky. Dylan Alderman then scored two goals of his own to put the Pride out front 4-3 at the end of the first quarter.

UMass once again scored two goals to open play in the second quarter. Sam Llinares and Korey Hendrickson, however, answered with a goal each to keep Hofstra ahead 6-5 at the end of the first half.

With the second half underway, Josh Byrne tallied his second goal of the game to extend the Pride’s lead to two goals. The Minutemen, on the other hand, not only responded with two goals to knot the game at seve, but they scored one more goal to give themselves an 8-7 lead going into the final quarter.

It was crunch time for both teams, and Hofstra wasn’t about to miss an opportunity to punch their ticket to the CAA tournament, so they came out in the fourth quarter and took the lead right back from UMass with two goals by Zachary Franco and Llinares. Those two goals would have been enough, but UMass wasn’t about to let their season end, so they scored one last goal to tie the game at 9 and send it into overtime.

It’s overtime. Brendan Kavanagh has the ball in his possession. He looks at the UMass goalie, and sees an open shot. He knows that if he fires the ball past the goalie, he will be the hero for Hofstra and the Pride will return to the CAA tournament. Kavanagh draws all the strength his body has left, and uses it to shoot the ball towards the net. Kavanagh hears a roar coming from his teammates, and he knows he just helped Hofstra lock their spot in the CAA tournament.

Though the Pride has claimed a spot in the CAA tournament, their season is not yet over. They now head back to James M. Shuart Stadium to host the Towson Tigers next Saturday. This game has just as much significance as the game against UMass. If the Pride can defeat the Tigers, then Hofstra will host the CAA tournament and will face either Delaware or Drexel. If they fall to the Tigers, then Towson hosts the CAA tournament with Hofstra facing Fairfield. It’s more than just having home-field advantage though. Next Saturday could be Sam Llinares’, Korey Hendrickson’s, Brian Von Bargen’s, and Finn Sullivan’s final home game of their collegiate careers, unless Hofstra defeats Towson.