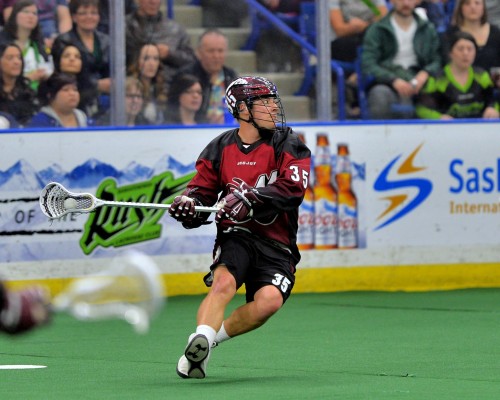 Milestones were set in the Mile High City for the Toronto Rock on Saturday night. As a team, they didn’t have much offensive muster, dropping a 10-5 decision to the Colorado Mammoth at the Pepsi Center. Individually, however, it was a fruitful game. Playoffs are out of the picture for the Rock but most of their players still have long careers ahead of them to rack up accomplishments.

Kyle Aquin, who spent all season on the practice roster watching regulars go down to injury finally got into the lineup. He recorded two assists in his first NLL game. Sandy Chapman reached 100 career assists, and Brodie Merrill reached 2000 career loose balls. Merrill is just the third player in NLL history to reach that mark. Rob Hellyer reached (and surpassed) 100 points on the season for the first time in his career.

Even the Mammoth got in on the milestone action. As a team, they matched a franchise record for home wins on the season with seven, and have a chance to break that record when they host the Vancouver Stealth on April 29. John Grant Jr. tied the record for most goals as a member of the Mammoth with his 230th. Rookie Bryce Sweeting recorded the first assist of his career.

The game itself was a low scoring affair with solid goaltending and defense on both sides. Nick Rose continued his great play for Toronto making 35 saves; he sits third in league GAA, behind Aaron Bold and the Mammoth’s Dillon Ward who made 49 saves. The Rock were 0/3 on the power play and the Mammoth 2/4, scoring on both ends of a double minor checking from behind call to Colin Boucher – his first penalties of the season.

Callum Crawford opened the scoring 34 seconds in and extended Colorado’s lead to 2-0 later in the quarter as he vertical-jumped through the crease. Turner Evans replied with a quick stick for Toronto but Ilija Gajic restored the two goal lead with a transition breakaway goal.

Hellyer scored the only goal of the second, his 38th of the season, early in the second quarter, skipping the ball through the wickets of Ward. Colorado led 3-2 at the half.

Grant fought through three Rock defenders to find Mike Mallory alone at the side of the net to open the third quarter scoring. Eli McLaughlin then scored two power play goals. Rookie Josh Sullivan potted Colorado’s 7th goal on a transition break. Colorado pulled Ward for what they assumed would be the last possession of the third, but a lazy pass allowed Sandy Chapman to intercept the ball and score his first goal of the season to bring Toronto to 7-3.

The Rock showed signs of life after Chapman’s goal with Kasey Biernes scoring at 2:18 of the fourth quarter to make it 7-4. Grant knocked down his defender in front of the net to restore Colorado’s four goal lead but Dan Lintner shot through a screen to fool Ward at 9:43 to get one back for Toronto. Grant then killed the momentum by adding a second goal that trickled through Rose’s pads. Toronto pulled Rose early for an extra man advantage but Gajic picked up a loose ball and beat Rose back to the net to double up the Rock.

The Rock have one more game in 2016; they will travel to Calgary next weekend to face the Roughnecks for their final contest in a generally forgettable season.