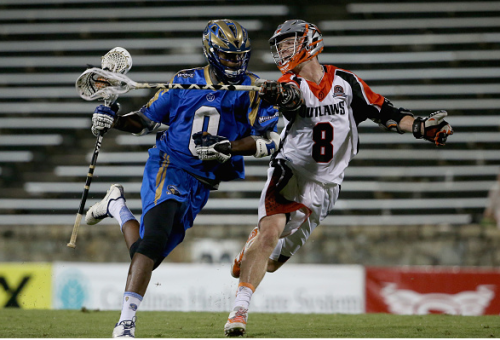 The Charlotte Hounds on a rainy Saturday night defeated the visiting Denver Outlaws 14-11 behind an eight-goal third quarter. It marks the second-straight victory for the Hounds, who last week beat the New York Lizards 13-12. Attackman Kevin Cunningham was named Coca-Cola Player of the Game following a seven-point (4g, 3a) performance, while faceoff specialist Brendan Fowler won a personal best 20-26 draws.

Opening faceoff was delayed by approximately 20 minutes due to lightning in the area. Once the game commenced, the teams traded possessions before Shamel Bratton fired a rocket from long range to give the Hounds an early 1-0 lead. But John Grant Jr. tied the game on a shot that barely dribbled over the goal line, and Erik Adamson beat Pierce Bassett on the run to give the Outlaws a 2-1 advantage after the first.

It was the Hounds who struck first again in the second quarter, as John Haus tied the game at 2 off a feed from Cunningham. Two minutes later, Joey Sankey muscled his way to the net to put the home team back in front 3-2. The Outlaws didn’t take long to respond, as Mike Bocklet received a beautiful feed from his brother Chris Bocklet to knot the game at three. Over 10 minutes ticked off the clock without another goal before Bratton tallied his second of the night with just 4.7 seconds to play in the half, giving the Hounds a one-goal lead.

Momentum stayed with the Hounds throughout the third, as the team put together a nine-goal run, including two each from Cunningham and Mike Sawyer, for a 12-3 advantage. Three of the goals came on a man-up advantage after the Outlaws’ David Dickson was called for an illegal stick. After being held without a goal for more than 22 minutes, Chris Bocklet finally beat the Hounds defense with 2:20 left in the quarter.

Bocklet also opened the scoring in the fourth, receiving a pass from his brother Mike, and Adamson scored his second of the night to make it a 12-6 game. Cunningham from Sankey put the Hounds back in front by seven, but the Outlaws strung together five-straight goals to pull within two with less than three minutes remaining in the game. The Hounds regained possession and Cunningham found the top left corner off a feed from John Haus to seal the 14-11 victory. Bassett finished with 14 saves on the night.

Prior to the game, the Hounds held their 2nd Annual Zero-K benefitting the Isabella Santos Foundation. The event was put on in conjunction with NoDa Brewery, Yellow Cab Co. and 106.5 The END’s Woody & Wilcox.

The Hounds (3-7) will hit the road next weekend and travel to Boca Raton for a Friday evening tilt with the Florida Launch (2-8). Faceoff is scheduled for7:30pm at FAU Stadium. The Launch enter the game on the heels of a 16-12 defeat of the New York Lizards on Friday, June 26. The same two teams will meet again in Charlotte on Saturday, July 11 for the Hounds 2015 home finale. That game will faceoff at 3:30pm and tickets are available atcharlottehounds.com/tickets