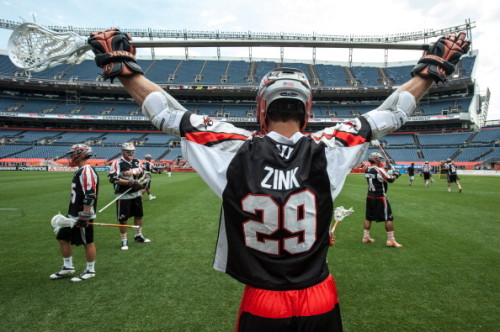 The NFL (National Football League), the NBA (National Basketball Association), the MLB (Major League Baseball), and the NHL (National Hockey League), and even the National Lacrosse League all have one thing that MLL (Major League Lacrosse) doesn’t have, and that is a Hall of Fame.

If you look at the NFL, MLB, NBA, and NHL, the only way you can be inducted in is if you played in the league. Major League Lacrosse just completed only its 15th season. It’s still a young league but their have still been some great players to play in the league..

Here are the first players chosen by me to be in my MLL Hall of Fame, the only rule is they have to have not played in a game since the end of the 2014 MLL season.

Tim Goettelma
Tim Goettelman spent his whole career in a Long Island Lizards jersey and had an outstanding career. In his time for the Lizards, he helped bring home two titles, and also helped them reach the championship game a total of five times. In Goettelman’s career, he finished with 270 goals, good for third all-time entering the start of the 2016 season. Goettelman was also seventh all time coming into this season in career points with 366. Goettelman also ranks second all time in game winning goals with 14. Goettleman never left the Lizards and really helped make the Lizards a dominant force in the MLL to this day. Tim was also named the MLL’s Sportsman of the Year in 2009 and 2010.

Stephen Berger
Stephen Berger began his career in Long Island/New York, and that is really where Berger found his most success. Although Berger was never able to bring a title home to Lizards fans, he did help them reach the title game twice. Berger also spent some time in Charlotte and Boston towards the end of his career. His career numbers are 226 goals and 79 assists as well as seven two-point goals, giving him 319 points.

Ryan Boyle
Ryan Boyle had an outstanding MLL career, and always seemed to win on the big stage. Boyle recently walked away from the game but what he left behind was a great resume. Early on in his career, Boyle played for the Philadelphia Barrage who no longer exist in the MLL. In his time there, Boyle helped lead the Barrage to three title games, and came away as a champion in all three. In Boyle’s rookie year, not only did he walk away with a title but was also named the Rookie of the Year. After the Barrage were gone from the MLL, Boyle went to end his career in Boston, and he wasn’t done winning. Boyle found a way to get the Cannons in to a title game and helped win the Cannons a championship. Now looking at the numbers, these are where Boyle stands on the All-Time MLL records books coming into the start of the 2016 MLL season: tied for 10th all time in game winning goals with 9. Boyle currently holds the MLL record for career assists with 272, and fourth all time in points with 449.

Mark Millon
Mark Millon is our next inductee. Millon saw success early on in his career in Baltimore as a member of the Baltimore Bayhawks, now Chesapeake. In his time there, Millon helped lead the Bayhawks to three championship games but only took home one title. Following the end of his time in Baltimore, Millon then went to Boston before he then made a return back to Baltimore. After his second brief stint with Baltimore, the team was then moved to Washington then after some time in Washington, Millon went to the Long Island Lizards, and then played his final season in Rochester. What Millon left behind was a great career, and is one of the greatest scorers in the MLL. Entering this season, Millon was eighth all time in goals with 240, and tied for tenth all time in points with 360. Millon had a decorated career in the MLL, winning a plethora of awards, starting in 2001 when he was named the All-Star Games MVP. He then followed that season up by being named the Offensive Player of the year two years in a row in 2002 and 2003. Also in the 2002 season Millon was named the Championship games MVP. But Millon’s final accolade wouldn’t be accomplished till 2005 when he was named the league’s Co-MVP with Garry Gait.

Kyle Dixon
Kyle Dixon’s career was good in the beginning, but he found his most success towards the end of his career. Dixon was apart of the Baltimore Bayhawks for a few years before the team moved to Washington. Dixon stayed a part of the Bayhawks organization his whole career. But once the team moved to Chesapeake everything seemed to click. Dixon helped lead the Bayhawks to three championship games and the Bayhawks came away champions in all three games. Why I choose Dixon to make the hall of fame s his unique play style that I think changed the game. Dixon is currently the all-time leader in two-point goals with 52. Dixon changed the game and made people not afraid to pull up and shot the two point shot.

Ryan Powell
Ryan Powell is the first Powell I will select this year. Mikey Powell had a good MLL career, but really didn’t play in the MLL long enough in my mind, so Mikey Powell just misses the cut this year. Ryan had a great career in the MLL but never really had much success winning any championships. In fact Ryan never won in MLL championship. Ryan still managed to get to one title game in his career so he still gets in. If you also look at the career numbers Ryan has it’s easy to see why he is being put in this MLL Hall of Fame. Ryan achieved so much in the MLL in the MLL’s first season Ryan was named the league’s first ever MVP. But it wouldn’t be the last time he would take home the award either. Powell was once again named the league’s MVP in 2006, as well as being named the Offensive Player of the Year that year as well. But Powell’s final award would come in the 2008 season when he was named the 2008 All-Star Game MVP. According to my calculations which I got by looking back at the Record books of the MLL seasons Ryan Powell finished with 205 career goals, and 189 assists giving him 394 career points, all those stats include the many playoff appearances as well.

Gary Gait
Gary Gait. You hear that name and you think of how great of a career he had at Syracuse. Gait actually also had a successful career in the MLL. Gait actually helped lead the Long Island Lizards to the first ever Major League title and was actually named MVP of the game as well. Gait managed to also make three more championship game appearances, but in a different uniform playing for the Baltimore Bayhawks. In his time there, Gait helped lead the Bayhawks to two championships, including in the 2005 season when he was named the championship games MVP. That same season, Gait was also named the CO-MVP of the league alongside Mark Millon. Gait was also once named the 2003 MLL All-Star Game MVP. Gait when he decided to hang it up left behind a great career, these stats include playoff games. 186 career goals, and 70 assists giving him a career of 256 points, not too shabby Mr. Gait.

Jesse Hubbard
Jesse Hubbard had a great career only playing for two teams, the New Jersey Pride and the Los Angles Riptide. Hubbard’s teams always struggled in his career and he actually never made a championship game appearance. But in the end, Hubbard had a great career, and it’s just based upon looking at the numbers. Coming into the start of this season, Hubbard ranked seventh all time in career goals with 247. Although Hubbard never really found success in the postseason, he always tried to help will his team into the postseason but his teams always seemed to come up just short of a title game.

Greg Cattrano
Cattrano had a decorated MLL career. Cattrano began his career in Baltimore, where he found success right away, helping lead the Bayhawks to three championship games in the first three years of the league, but sadly the Bayhawks only walked away with one title in those three attempts, that title game in 2002. In the first couple years of the league, Cattrano was the gold standard for MLL goalies leading the league in save percentage in 2001, and 2002. After the 2003 season, Cattrano joined a new expansion team the Philadelphia Barrage in the teams first season he helped lead the Barrage to the championship game and the Barrage won, and Cattrano was named the MVP of the title game. After the 2004 season, Cattrano spent the last couple of years with the Long Island Lizards where the team struggled to find any success. But Cattrano left behind a great career, his all time record including the postseason has him at 49-35 not to bad of a record, and career save percentage of .583 which includes postseason. Not to mention Cattrano made a killing in accolades making him one of the most decorated goalies in MLL history. For two straight years (2001 and 2002), Cattrano was named the Goalie of the Year, and again in 2004.

Lee Zink
Zink is the final inductee of this first class, and is actually the only defensemen inducted. Zink had an outstanding MLL career and really became known for his great defense and ability to shut down a teams best player. In Zink’s 11 year career that came to an end after the 2014 MLL season, he spent two seasons in Baltimore with the Bayhawks and the other nine season in Denver with the Outlaws. What Zink left behind in the MLL was a grinder a player who wanted to play in every single game possible. Zink played in 129 games, good for sixth all time entering the 2016 MLL season. Zink also might be known as a physical player who wasn’t afraid to throw his body around, and if he had to go to the box he would go to the box. In fact Zink currently sits fifth all time in MLL history in penalty minutes with 67.5. According to Zink’s retirement article which dates back to September 4th, 2014, at that time Zink had played in the most games in franchise history for the Denver Outlaws, playing in 110 games for the team. In Zink’s time with the Baltimore Bayhawks he helped lead the Bayhawks to two playoff appearances and one MLL title which came in 2005, his final season with Baltimore. In his first season with Denver, he helped lead the Outlaws to a championship game but the Outlaws would lose. The Outlaws didn’t get another shot at the title until 2008, when the Outlaws once again fell in the championship game. And the following year the Outlaws once again got close but lost again this time losing by one goal to the Hamilton Nationals. Zink and the Outlaws got another chance in 2012 to win a title but once again couldn’t get the job done. Then in Zink’s final season in 2014, Zink helped lead the Outlaws back to the title game and this time he finally brought home a title to the Outlaws. The end of Zink’s career could have been his best, in his last two seasons 2012 and 2013 he was named the MLL’s Defensive Player of the Year both years.