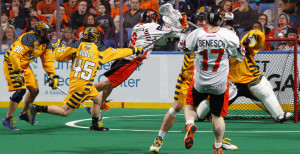 The Minnesota Swarm can finally say this rough season is over. Unfortunately for them it is over. The Swarm have finished the season with a 6-12 record and five games back of the Buffalo Bandits. The Swarm did finish the season on a high note toppling the three- time NLL Champion Rochester Knighthawks, in overtime, and taking two out of the three games they played.

The Swarm started the game out by jumping to a two goal lead on goals by Ethan O’Connor and the recently returned Kiel Matisz. Although jumping out to an early lead the Knighthawks stormed back and by the end of the first quarter the score stood at 5-3.

At the beginning of the second quarter Minnesota allowed a goal from Dan Dawson go by starting goalie Zach Higgins. After giving up a fifth straight goal Higgins was pulled and replaced by Brodie MacDonald. Higgins in his 15:58 of play gave up six goals on 14 shots. Although Higgins has taken most of the brunt this season, in terms of game time, MacDonald has had to come in a number of situations, after being the starter at the beginning of the season.

After MacDonald was sent in the Swarm rallied going into the half coming out with only a one goal deficit to erase.
After halftime the Swarm came out and took over the third quarter going on a 4-1 run that saw Kiel Matisz finish off a hat trick and Joe Maracle get his third goal on the season and second of the game. MacDonald in his relief duty had 10 saves in the quarter and only allowed one goal. Although the Swarm held a 9-7 lead over the Knighthawks the game was far done.

In the final frame of regulation the Knighthawks came back as if their lives depended on it, Trading shots with Minnesota like Rocky and Apollo Creed. With just under 10 minutes left in regulation the Knighthawks came within one, on a goal from Cody Jamieson (his fourth of the game), and roughly three minutes later Jordan Hall tied the game for Rochester to finish off his hat trick.

In overtime it was a goalie show, and mainly the Brodie MacDonald show at that. MacDonald made 12 saves in the overtime frame. During the flurry of action in the overtime Jason Noble nabbed a loose ball and sprinted down the field and put a nifty bounce shot right behind Matt Vinc to get his first of the season and win the game.
Kiel Matisz and Shayne Jackson both finished the game with five points with four goals and one assist and one goal and four assists respectively. As the winning goalie Brodie MacDonald finished with 47 saves and only allowed six goals in what amounted to almost a full games worth of minutes.

For the Knighthawks both Dan Dawson and Joe Resetaraits had six points and Cody Jamieson finished with five points. Matt Vinc finished with 48 saves and 13 goals against.

Minnesota’s season is over but hopefully the organization can come back next year and make the playoffs and bring some more early spring joy to the land of ten thousand lakes.