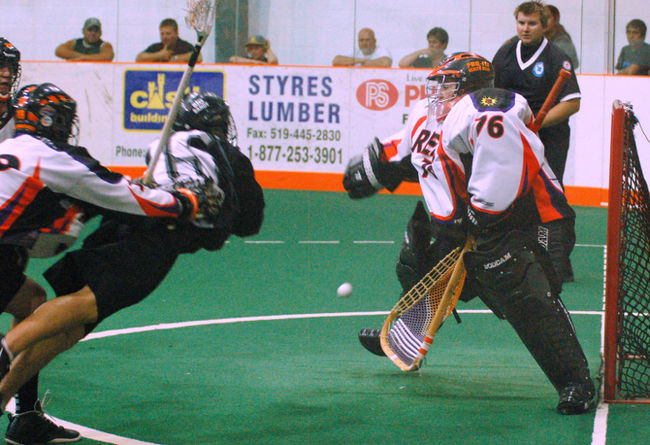 The Six Nation Rebels took on the St. Catherine’s Spartans in some Junior B OLA action Friday night. The Rebels, who are looking for their fifth straight Founders Cup championship and eighth since 1997, were 2-0 going into Friday’s game.

They opened up the year beating Welland 21-4 and cross-town rival the Hamilton Bengals 12-4. After a week off the Rebels came out strong but St.Catherines stuck around. For the Rebels, Garret Vyse-Suare opened up the scoring for after receiving the pass from Phil Henry. Being up 1-0 after the first, Garret came back and got his second goal of the game after Travis Longboat found him open and dished him off the pass.

Captain Mitch Green scored to make it 3-0 Rebels before Luke Stevens scored to get St. Catherine’s on the board.  After that, it was all Six Nation the rest of the way. Players such as returners Danton Miller, Jerry Staats and returning rookie of the year Layne Smith, all scored. Ricky Smith and Josh Miller each has two assists while Ty Logan had one.

Defender Kessler Doolittle plays some tough and stellar defense he also had an assist while scoring the last goal to give Six Nations the 8-1 win moving to 3-0 on the start of the year.

The Rebels also have Sherman Williams, the youngest brother of University of Virginia star Zed and NLL draft pick Zach Sherman, is another strong defensive player and is looking to make a name for himself out on the floor.

Goalie Briley Miller may be young but is nothing short of impressive between the pipes. Miller made thirty saves on the thirty-one shots he saw and will be a force in net all season long. Next the Rebels will go on the road for the first time this year and face Wallaceburg.