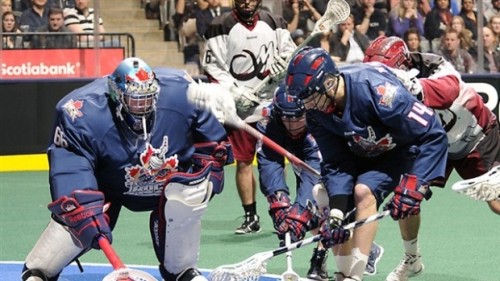 The overhaul of the Vancouver Stealth wasn’t just relegated to rebuilding a porous defence, but to give the offence more depth, balance and options at the disposal of head coach Dan Perreault. Vancouver has stayed close to home with many of these signings and didn’t have to travel far to ink Keegan Bal to a free agent deal for the upcoming season.

Bal is an athletic player who turned a strong end-of-the-season run into an excellent playoff run and, ultimately, an NLL deal. He played 11 games throughout the regular season for Steve Goodwin’s New Westminster Salmonbellies, scoring just eight goals as he was used all over the place. Towards the end of the year, he gained more confidence and more of a role in the offensive rotations.

When the playoffs came around, Bal wasn’t missing much. He rode a wicked 25 per cent shooting clip on 68 shots – third highest in the postseason and 18 more than Logan Schuss. Bal finished third in goals these playoffs as well, two and three behind Rhys Duch and Corey Small, respectively. Much of those goals came from the Shamrocks’ focus on pushing Schuss to the margins, but Bal deserves credit for actually making Victoria pay for that at some points. He has a great outside shot but can shoot well on the run and brings some transition ability to the table, too.

In terms of how Bal fits on the Stealth, his versatility will be a welcome asset. I wouldn’t be surprised to see him in the transition game a lot, but he will also be called upon to be that scoring threat on the perimeter after Rhys Duch. Tyler Digby plays a physical game downlow and Joel McCready is a meat and potatoes type of guy, so Bal makes a lot of sense as that second pure skill guy with Duch.

If Bal can come in and show the coaching staff he can contribute, it’ll be great in the long run for the Stealth. They need to have these role players start competing for bigger chunks of the pie, and Bal makes a lot of sense as the player who can realize his upside sooner rather than later.

And if he does, the Stealth have become just a little more difficult to play against; a mantra of the offseason.