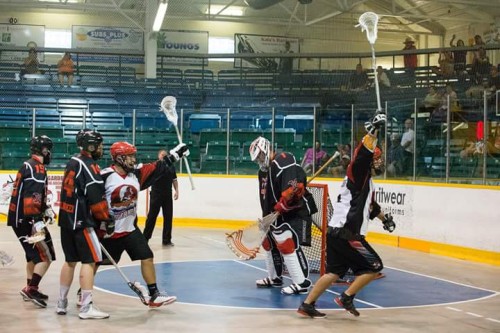 The Presidents Cup was a great week filled with some top-notch lacrosse, which took place in St. Catherine’s Ontario. Many teams from all over Canada and one from upstate NY had the same goal in mind to hold the trophy high over their heads Saturday night. The two teams that faced off in the championship were the Capital Region Axemen and the Six Nation Rivermen. Both had never won the President’s before, and the Rivermen only in their third year were runners up last summer and all season had one goal in mind to go back and be crowed champions.

Six Nations was stacked with top players from the Reservation and a few from off. They really pride themselves as being a team made up of hometown players and winning it for their community.  They don’t play out of the ILA but it’s the Gaylord Powless Arena or GPA for short that this team calls home as it has a very rich history.  They are ran by a lacrosse legend in Cap Bomberry who some people say may be one of the best box lacrosse players who have ever picked up a stick.

For a head coach, it is Stew Mounture who has a player was a big time forward once drafted by the Toronto Rock and hold the record for most goals scored in a NJCAA championship game. Stew as a great coaching resume he lead the Six Nation Rebels to championships in just is first two years as a coach back in 07and 08 he also won again in 2012. Other teams Stew has coached have been the once Junior A Akwesasne Indians, Oshweken Demons in (2012 Creators cup champions ) and has taking home many Nations Cup for the Oshweken Aces.

For the Rivermen they had a great week of play finish top in their division to get the Thursday bye and going right into Friday’s semifinals. In the Semi’s it was only fitting that they would take on Onondaga, the team that beat them in 2014.  Onondaga might have been the defending champion but Six Nations was ready to beat them.  After getting a early big lead Onondaga tried to come back but it was not enough as the Rivermen won 12-10. Roger Vyse lead Six Nations with five points as walked away with player of the game honors.

In the Championship, the Axemen had got past St. Catherine’s as Kedoh Hill scored the game-winning goal. This set up for the first game between the Axemen and Rivermen and looked to be a big time game for the cup. Early on Roger Vyse scored to get his team the lead but after going up early the Axemen scored to make it 2-1 after a Kedoh goal. Then after being down 3-1 they rolled three straight giving the team the lead. Callum Crawford, Tim Bergin, Caleb Wiles and Mark Vradenburg were the only players to score for the Axemen but all had multiple goals. For Six Nations Roger Vyse (4G, 1A) was named MVP while Wayne VanEvery (2G, 1A) Cory Bomberry (1G-2A) Also Randy Martin had two big time goals while Tom Mounture scored on the break away, Holden Vyse scored and Mike Miller finished things off to make it a 14-11 championship final.

The Rivermen are your 2015 Senior B Presidents Cup champions Congratulations to them and good luck next season.