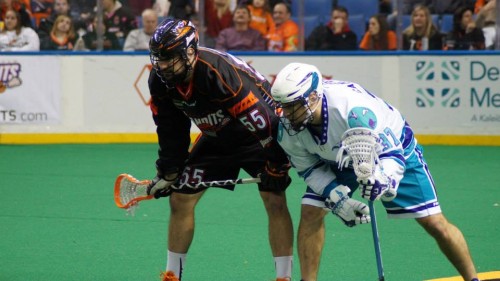 The Buffalo Bandits have been eliminated from the playoffs at the hands of the Rochester Knighthawks. Rochester controlled much of the temp of the game game, and lead for all but a couple of minutes early in the 1st quarter, and as a result, came away with the 14-11 win.
“We did not play good tonight” said Bandits Head Coach Troy Cordingley. “Especally considering how well we played down the stretch… But the champs taguht us a lessontonight“.
After a quick Bandits goal by Chad Culp, the Hawks went on a early run lead by Jordan Hall (which ran the score up to 5-1), and really never looked back; because they never lost the lead (however the Bandits did tie it later in the game, to no avail of course). The Bandits seemed to just have dug themselves a hole too deep to recover from.
The Bandit offense just could not get anything through the middle. The Hawks defense lead by guys like Sid Smith and Paul Dawson (among others) had their sticks in the passing and shooting lanes, which lead to them forcing mainy (clean) turnovers.
“I think if we could have worked the shot clock better, and be more selective in our shots [we would have done better]” said Bandits captain John Tavares.
In addition to Hall having a big game (3g, 1a) forward Joe Resetarits got a little bit of redemption on his former team that traded at this past trade deadline. He was on fire collecting not just the hat trick, but an additional goal to that (4g) and six loose balls. Effectiveley, his four goals were the difference, and even Dhane Smith noted that in his post game interview.
And so, the Hawks continue on their quest for four Champions Cup in a row after trucking by the Bandits. They’ll meet the first seed Toronto next week, which will be a two game series.