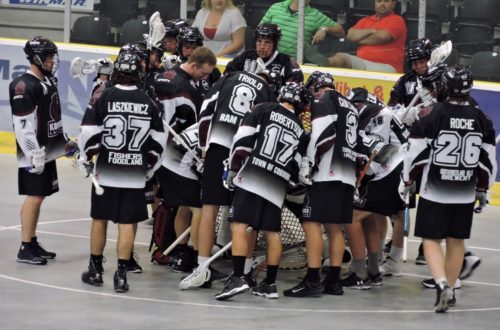 The Cobourg Kodiaks were presented a gift by the Six Nations Chiefs on Sunday. Unfortunately, the Kodiaks couldn’t capitalize on the fact that the Chiefs showed up to the Cobourg Community Centre with only 14 runners, none of whom were named Jamieson, Staats, Smith, or Benesch. They even put their backup Warren Hill in goal but the Kodiaks suffered a nearly 40 minute power outage on their home floor as the Chiefs pounded them 15-6.

It was 8-0 at one point in the second period but the Kodiaks woke up to score six goals in the last 21:22 of play to make the score respectable. Luke Laszkiewicz scored at 18:38 of the second period to get Cobourg on the board. Jordan Durston replied right back for the Chiefs, who then pulled Hill on their last possession of the period for a man advantage (not that they needed it at that point, leading 9-1). Joey Cupido, robbed of a buzzer beating empty netter in the second period on Thursday in Brampton, rifled the ball into the empty net at 19:59 for a little momentum going into the third.

“It was just a little bit of confidence,” said Laszkiewicz, who had five points. “When we’re clicking we’re a good unit and we just need to go into tomorrow and have that confidence the whole game.”

The Chiefs scored three goals in the first three minutes of the third (from Joe Hall and Quinn Powless with two, one on the power play) to put the Kodiaks in an even bigger hole, but they soldiered on. Jordan Robertson scored on a quick-stick goal at 4:21 and John St. John skipped the ball past Hill at 7:11. Unfortunately the defense and goaltending couldn’t hold off the Chiefs onslaught and Stephen Keogh, with the Chiefs 13th goal, finally chased Rance Vigneux from the Kodiaks net in favour of Ryan Shuetzkowski who saw his first minutes of MSL action. Johnny Powless added to the lead at 15:04. Dylan Goddard and Laszkiewicz made last ditch efforts for the Kodiaks at 17:28 and 18:18 but it wasn’t enough, and Vaughn Harris’ fourth goal at 19:30 ensured the Kodiaks winning streak would end at one.

“We did not come to play tonight,” Kodiaks head coach Jamie Dubrick said. “Mentally, physically, or anything. We just didn’t show up.”

The Kodiaks ran with the Chiefs for most of the first period, allowing only one goal in the early going. Vaughn Harris scored off the bench at 7:41. Two late goals though, from Stephen Keogh at 18:41 and Johnny Powless at 19:11, were like a punch in the gut for the Kodiaks.

“We played a great first period,” Dubrick said. “In the last minute they scored two goals and that was the end of the game right there. I knew coming in to the second period it was done. The guys came off like we lost, the game’s already over. You can’t come back from that. We have a young team that needs to rebuild and focus and they didn’t.”

Laszkiewicz, who had five points, said the Chiefs depleted roster was a missed opportunity.

“You try not to let that affect your play but obviously it did,” he said. “We just need to learn in the future that if a team does that it’s our opportunity to take it to them and get a W.”

The Chiefs made it 5-0 early in the second with Harris scoring his second and face-off specialist Jay Thorimbert also tallying. A Kodiaks timeout settled them down for awhile until Johnny Powless, Harris, and Quinn Powless scored in quick succession for the 8-0 lead.

It was a reversal of the usual – the Kodiaks tend to start well but fall behind later in the game. They’ve yet to put together a full 60 minute effort on home floor. Tonight, it was almost 40 – a great defensive effort in the first and some offensive flashes in the third, but that’s not enough to win in the MSL this year, even against a short staffed opponent.

The Kodiaks have allowed 15 goals in three of their last four games. Prior to last week’s home and home against the Lakers, the Kodiaks had been in all of their games, but some bad habits seem to have creeped in.

Laszkiewicz suggested the Kodiaks were still thinking about Thursday’s game.

“We had a little bit of a winning hangover,” he said. “We were on a pretty big high from winning our first game and the first game for Cobourg and I think we weren’t prepared coming into this game. We just didn’t have it tonight.”

The Kodiaks leapfrogged the Brampton Excelsiors for fifth place this week defeating them 8-6 and recording their first win as the Cobourg franchise. They now sit at 1-7-1 with three points while the Excelsiors have two.

“Everybody was happy,” Laszkiewicz said. “It was good to get the monkey off our back and hopefully we’ll have a couple more wins in the upcoming weeks.”

“Up there in Brampton we played a full game and the guys won, they played well,” Dubrick said. “Brampton had a full roster, they were only missing two guys. It’s good for us to get that one off our backs and it’s time to keep on going.”

The Kodiaks are right back in action on Monday night as they visit the fourth place Oakville Rock at the Toronto Rock Athletic Centre.

“This game’s over,” Dubrick said. “That’s what you have to do in this league… just go on to tomorrow and hopefully we get a different turnout from the guys.”