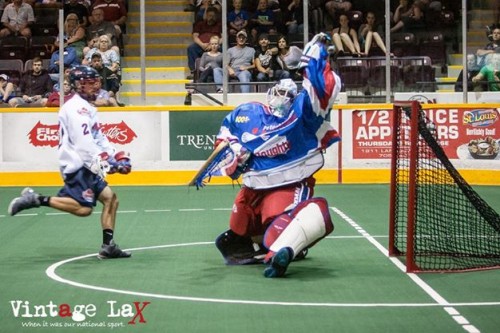 The Peterborough Lakers got back to their winning ways this past week, defeating the Kitchener-Waterloo Kodiaks twice in a home and home series. The wins kept the Lakers solidly in second place in the MSL after two losses to the league leading Six Nations Chiefs the week before.

“It’s a little bit slower pace for us [vs KW], so as we’re learning what we want to do it’s nice to play against the teams that don’t quite move the ball as quickly as Six Nations has,” Head Coach Mike Hasen said. “It’s a good learning curve for us and a chance to get better.”

Thursday the Lakers won 10-6 in KW goalie David DiRuscio’s first game against his former team. He has played well as KW’s starter but wasn’t able to stop the firepower of his former teammates. Things got heated after Curtis Dickson tried, but failed, to score by bouncing the ball off DiRuscio’s back and into the net. DiRuscio jumped right into the scrum that ensued, and then took a roughing penalty on a subsequent scrum. Sunday, the animosity continued as he was involved with more rough stuff.

Sunday the Lakers won 13-8, the first time they have scored over ten goals since the season’s opening weekend.

Adam Jones had a breakout weekend, scoring four goals and six assists. Despite leading the Colorado Mammoth in scoring with 93 points in 16 games, Jones has had a hard time translating his success to the MSL stage thus far – until last Thursday, that is.

“It was a big night for Jonesy,” Hasen praised. “He’s been struggling as of late so far, and we needed him to catch fire and tonight was a good kick off and we expect that kind of night from him every night moving forward.”

Jones is getting used to his summer teammates again.

Chad Tutton played his first game for the Lakers this past weekend, making an impact on defense, although he picked up three minor penalties.

“He was good,” Hasen acknowledged of Tutton’s MSL debut. “He’s learning. He’s a big strong kid back there and he’s doing a good job. Getting him to pick up a few more loose balls will be nice.”

After their “easy week,” the Lakers are right back playing the Chiefs this Thursday. They would like nothing more than to beat the Chiefs and gain back some of the mental advantage they’ve lost. A win would also pull them back into a tie for first place.

“No one likes to lose, especially twice to the same team,” Jones said on Thursday. “We didn’t want to look ahead past Sunday’s game against Kitchener but we definitely have [this] Thursday marked off on our calendars ready to go.”