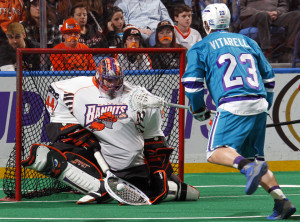 The Rochester Knighthawks are coming off a bitter sweet 2015 NLL season which saw them get eliminated in the NLL Eastern Division finals at the hands of the Toronto Rock. The dynasty had to come to an end at some point, the Knighthawks of course were the reigning NLL Champions for three straight seasons (2012, 2013, and 2014). While the 2015 season was far from a failure, they still did not attain their main goal of coming away with a fourth straight NLL Championship, so where do they go from here?

K-Hawks GM Curt Styres is known for keeping the same group of core players from season to season, making only minor (albeit vital) tweaks in the roster. In game 1 of the NLL East Division finals, the team saw their star MVP player Cody Jamieson go down with a torn Achilles tendon and as a result, missed game 2 which saw the Hawks lose 11-8, then get steamrolled 8-2 in the 10 minute mini-game by the Toronto Rock. The injury was so severe that Jamieson had to have off-season surgery to repair the tendon. The Achilles is a very delicate part of the body, and injuring it even slightly is very painful, let alone tearing it. So the big question is how effective will he be once he comes off surgery? He more than likely will miss most (if not all) of the summer MSL season, so he won’t have the time to hone his skills in during the NLL off-season either. That being said, I think the Knighthawks should be on the safe side and pick up a lefty forward to add even more depth to the offense.

The Knighthawks currently hold the second overall pick in the 2015 NLL Entry, I think they would be smart and pick up Randy Staats (F-R) from Six Nations (281 points in 63 Jr A games for the Arrows). As for addressing the lefty forward concern, I think the Knighthawks should select Turner Evans. Evans is an OSU alumna and played his Jr. A ball with the Peterborough Lakers (even seeing some time with the club’s Sr. A team). Evans has racked up 28 goals and 66 assists for 94 points in his 2014 Jr. A campaign earning him second all-star team honors. His best Jr. A season came in 2011 when he was 7th in OJALL scoring with 98 points (28g,70a). Now Evans has been projected to go as high as the late first round, however he may slip a little bit lower just in time for the Hawks to grab him. If not, the Hawks have the expendable resources (in my mind) to pick him up earlier if desired. The Blackwolves are somewhat in a rebuild mode, so they will more than likely be open for trades of their eighth overall pick for proven players.

The defense I believe also needs some tweaking. Goaltender Matt Vinc led the league in saves with 655. While that is a feat given his league leading SV% of .803, that also means that his defense allowed the most shots in the league, which is not a great feat. Vinc has had to stand on his head during many games throughout the season, but he can’t, and should not have to do that game in and game out. The Knighthawks would be wise to give prospect defenseman Colin Boucher more playing time on the active roster. I’ve seen Boucher play both on the MSL level and in the NLL pre-season with the Buffalo Bandits and his size and footwork proves to be a great addition to any defensive scheme. There isn’t too many big name defensemen in this years draft (with the exception of guys like Graeme Hossack, and Riley Quinlan) so free agency may be the best bet to add that one more piece to complete the puzzle. Journeyman NLL defender Rory Smith becomes an un-restricted free agent (UFA) from the Vancouver Stealth this off-season. Smith has played with 6 different teams in eight years, so I don’t think it’s an impossible scenario that he finds a new home for 2016 in Rochester. Smith brings the grit and aggressiveness needed to be a starting NLL defender and has been dubbed “the toughest player in the NLL” by many coaches/GM’s including Troy Cordingley and Steve Dietrich (during his stint with the Bandits in 2014). Once known as more of an enforcer, Smith has proven he can be a useful stay at home defender and would benefit the Hawks defensive lineup well. Given Smiths background with Knighthawks front office staff (having played for the Curt Styres’ owned Six Nations Chiefs for several seasons) he just may be on the radar of the Knighthawks, and with good reason.

As with many Knighthawks off-seasons, they don’t need a whole over haul of their roster, they just need to make a few small, yet vital moves to compliment their game plan. I don’t think it’s anyone’s doubt that whatever moves Styres makes this summer, it’ll be the right ones. There is a reason why he is known as one of the leagues top owners and general managers, and I have no doubt that you will see Rochester gunning towards a serious NLL Champions Cup run.