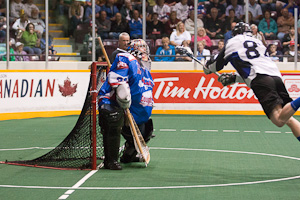 The Century 21 Lakers took a three games to one series lead over the Oakville Rock on Tuesday night at the Memorial Centre with a 9-7 win. The Lakers were led in the first period by a natural hat trick from Cory Vitarelli, and a spectacular solo effort recovery goal by Nick Weiss, ending the period at 4-1.

Oakville outscored the Lakers 3-2 in the second period. Despite a herculean effort by the Rock’s Wes Berg with five goals, the Lakers and Rock both added three in the third period for the Lakers to maintain their lead.

The game was a tightly contested affair with lots of physical play including one fight between Adam Jones and Ian MacKay. Matt Vinc took the win while Nick Rose suffered the loss for Oakville.

Scoring for the Lakers were:

Cory Vitarelli was named the Spanky’s Player of the Game.

Game five goes this Friday, August 14, at 8:00pm at the Memorial Centre. The Lakers can wrap up the series with a win on Friday. Game six, if necessary, will be Saturday in Oakville with game seven back in Peterborough on Sunday.