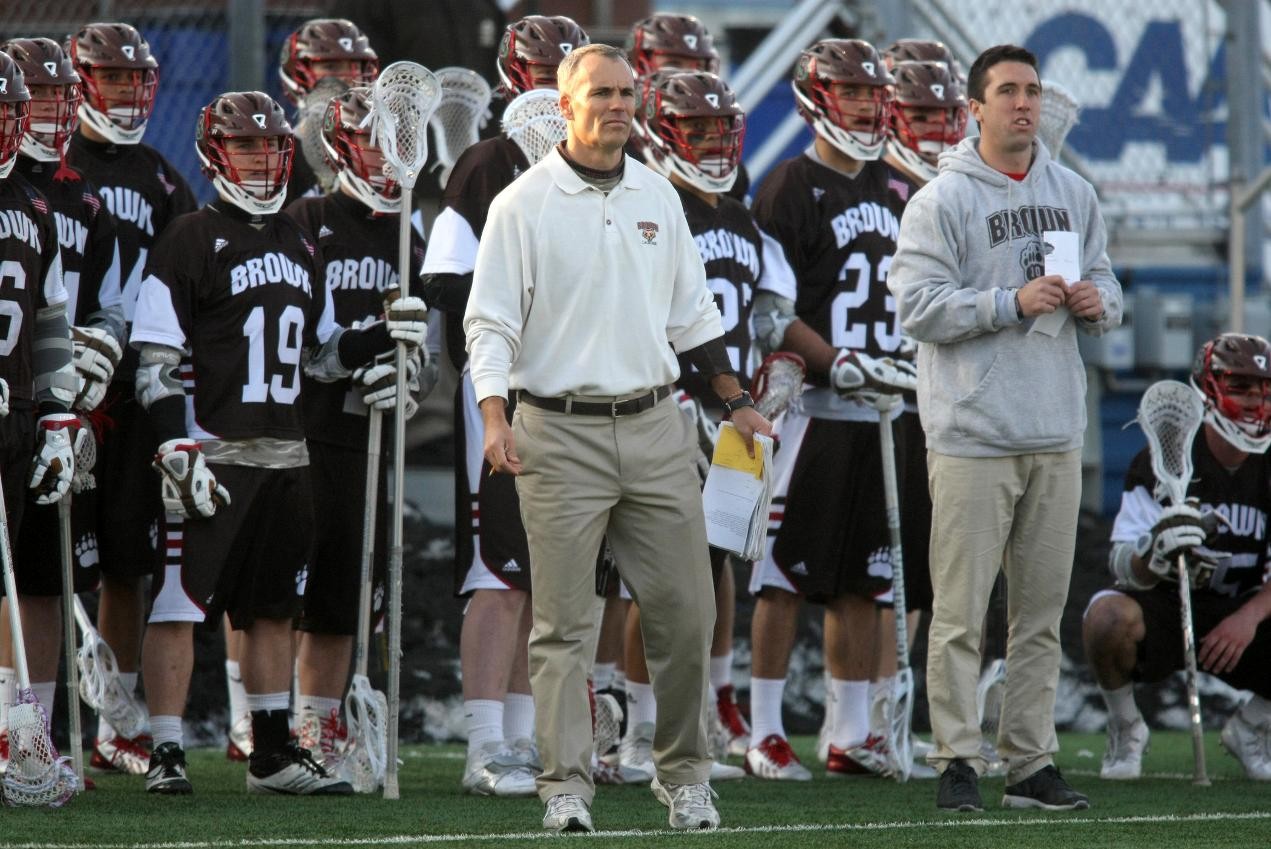 Former Virginia head coach Dom Starsia went from his alma mater at Brown to Virginia and spent 24 years in Charlottesville. Before he left Rhode Island, Starsia coached a young Lars Tiffany and they have been very good friends ever since. When Brown was still in the NCAA Tournament, Starsia went to many Brown practices and games to support his alma mater and Tiffany.

And now, Tiffany will follow in a similar path that Starsia took nearly 25 years ago. Tiffany will leave his alma mater and take the helm as the 17th head coach of the University of Virginia. Tiffany has been a head coach for 12 seasons, and the last 10 at Brown. He helped spearhead a high-powered offense for the past two seasons, and led the Bears to a historic 16 win season and an appearance in Championship Weekend.

Brown players were informed of Tiffany’s departure about two hours before the official announcement was made via an email from their former coach.

This is arguably the biggest head coaching transaction since Bill Tierney left Princeton for Denver in 2009. No word on whether Sean Kirwin and/or Kip Turner will join Tiffany at Virginia, or if Joe Starsia and Marc Van Arsdale will stay in Charlottesville, but Tiffany said in his teleconference today that he wants to keep his staff intact. Turner reportedly bought a house in Rhode Island about a month ago. Tiffany plans to honor the verbal commitments from the 2017, ’18, and ’19 classes. Tiffany also expects to play the same style of play as they did in Providence.

Another question is if Will Gural and Henry Blynn would be interested in coming back for a fifth season of play. Both were injured in one of their four seasons at Brown, and since the Ivy League does not allow a fifth year of eligibility, they still have a final year of eligibility. Tiffany said that the decision is between Wall Street and a fifth year of lacrosse, but will reach out to them again.

As for the current roster, the Wahoos bring back a number of notable players on offense. Zed Williams, Ryan Lukacovic, AJ Fish, Matt Emery, Mike D’Amario, Phil Poquie, and Ryan Conrad, who was the top incoming freshman last season. They’ll get the top 2016 and 2017 players in Dox Aiken and Matt Moore as well, and have plenty of other weapons coming too.

A question that has be talked about is whether or not Dylan Molloy could transfer to Virginia as well. I think that’s a ridiculous question to ask. He’s a senior on a dominant Brown team, and currently still has the guy running his offense in Kirwin. If the entire staff leaves, I don’t think it will happen either. He’s a leader on this Bears team, and jumping ship in your final season doesn’t show any qualities of being a leader. I think he stays at Brown for his final season.

Virginia athletics director Craig Littlepage announced Tuesday (June 21) that Lars Tiffany, the head coach at Brown the past 10 seasons, has been named the 17th men’s lacrosse coach in program history.

“I’m excited to welcome Lars Tiffany to Charlottesville and the University of Virginia to lead our men’s lacrosse program,” Littlepage said. “Lars is one of the country’s more innovative coaches. His program is based on the development of young men as student-athletes and pushing them to excel in the classroom, in the community, and in competition. This foundation, combined with an aggressive and attacking style of play at both ends of the field, has proven to be successful over the course of his coaching career. His vision for our program to annually compete for championships and achieve high academic performance is in alignment with our goals of Uncompromised Excellence.”

Tiffany has been a head coach for 12 seasons, the last 10 at Brown, his alma mater. He led the Bears to Championship Weekend in Philadelphia in 2016 behind a 16-3 record. The 16 wins in 2016 was a program record for the Bears. Brown’s offense was potent in 2016, leading the nation with 16.32 goals per game. Under Tiffany’s tutelage, nine Brown Bears earned All-America honors in 2016, while Dylan Molloy was the recipient of the 2016 Tewaaraton Trophy and was named by the USILA its most outstanding player and attackman of the year. Brown goalie Jack Kelly was named the nation’s most outstanding goalie and the winner of the 2016 Senior CLASS award for men’s lacrosse.

“Stepping into the seat as the head coach of the Virginia’s Men’s Lacrosse program brings both a tremendous exhilaration and responsibility,” Tiffany said. “I am very fortunate to have Craig Littlepage entrust me with this program. It is also clearly understood that the coaches and athletes of Virginia Lacrosse that have come before me have established a very high bar for measuring success in Charlottesville. My staff and I are eager to begin working with the men as we establish the principles and guidelines of our aggressive, fast-paced system of play that relies upon uncompromising fitness, competitive fire and a passion, and joy, for the game of lacrosse.”

Tiffany guided his 2015 team to the number one seed in the Ivy League Tournament, an Ivy League championship and NCAA Tournament berth, changing the landscape of college lacrosse with a unique fast break offense that scored 237 goals, averaging 13.94 goals per game, fifth best in the nation.

Tiffany guided Brown to its second Ivy League Championship under his watch in 2010, while also earning a berth in the first-ever Ivy League Playoffs. His team also posted back-to-back winning seasons in 2013 and 2014.

In 2009, Tiffany coached Brown to its first NCAA Tournament appearance since 1997, before falling in overtime to Johns Hopkins in the NCAA First Round. His 2009 team posted a 12-4 record and was ranked as high as eighth nationally during the season, finishing the season as the 11th ranked squad in the nation.

Tiffany’s 2008 squad captured the Ivy League title with a 5-1 league mark, posting an 11-3 record to earn the most wins at Brown since 1994. Brown, the number one ranked team in New England, finished 13th nationally in the final USILA coaches poll, with just six teams in the nation winning more games than the Bears.

In his first season at the helm of the Brown team, Tiffany turned the fortunes of the program in the right direction, guiding the Bears to a 7-7 record in 2007, and a national ranking as high as 18th.

Tiffany came to Brown from Stony Brook, where he was the head lacrosse coach in 2005 and 2006, posting an 18-13 overall mark. His 2006 squad finished second in America East with a 4-1 league mark and was ranked in the Top 20 in two weeks. In 2005, Tiffany’s Seawolves appeared in the Top 20 for the first time ever, and were ranked as high as 14th nationally. Tiffany, the 2005 America East Coach of the Year, led Stony Brook to wins over Penn State and Rutgers, as his Seawolves boasted the number-one ranked man-up unit in Division I.

Tiffany arrived at Stony Brook after successful stints at Penn State, Dartmouth, Washington & Lee and LeMoyne. He spent his four years at Penn State (2000-2004) as the top assistant under head coach Glenn Thiel, and was involved in all facets of the lacrosse program as the team’s defensive coordinator and recruiting coordinator. Tiffany’s defensive units were outstanding during his four years, and in 2002, the Nittany Lions led the nation in man-down defense.

Prior to coaching at Penn State, Tiffany was an assistant coach at Dartmouth College, where he spent the 1999 and 2000 seasons under head coach Rick Sowell. In his two seasons as defensive coordinator, the Big Green’s goals allowed per game in Ivy League contests dropped from 15.3 to 9.0. Dartmouth earned its first share of the Ivy League title and a berth in the NCAA tournament in 2003.

Tiffany was an assistant coach from 1997-98 at Washington & Lee University. In 1998, the Generals went 13-3 and advanced to the quarterfinals of the NCAA Tournament while finishing fifth in the USILA Division III national rankings.

Tiffany began his collegiate coaching career at LeMoyne College, where he served as an assistant coach of men’s lacrosse and co-head coach of the women’s lacrosse program from 1994-96. A native of LaFayette, N.Y., Tiffany graduated from LaFayette High School where he lettered in football, basketball and lacrosse. Upon graduation from Brown, he taught biology and coached lacrosse and football at the Robert Louis Stevenson School in Pebble Beach, Calif., from 1990-94.

A 1990 graduate of Brown, Tiffany was a two-time team captain and starter on defense for three years. Tiffany played for former Virginia head coach Dom Starsia at Brown. A Biology concentrator, Tiffany played on two Brown teams that advanced to the NCAA Tournament (1987 & 1990). He was Co-MVP of the Brown squad that captured its first-ever NCAA playoff victory in 1990 (12-9 vs. UMass). Tiffany capped his career by playing in the North-South Senior All-Star game.

The University community welcomes Lars, Tara and their daughter, Charlotte.