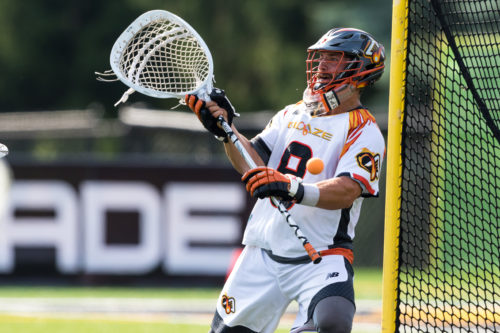 It seemed almost too good to be true; the week after trading Myles Jones, a transcendent college lacrosse star, the Atlanta Blaze defeated the then-first place Ohio Machine in overtime.  Adding to the Hollywood-like script, Matt Mackrides, who was acquired for Jones, scored the goal to win the game in overtime for the Blaze.

The game was constantly tight, an entertaining, back and forth offensive explosion that saw Marcus Holman rack up four more points, Peter Baum register a hat trick, and Mark Cockerton tally four goals for the Machine. On the Atlanta end, Kevin Rice lead the way, scoring four goals and providing four assists, an 8 point night for the former standout Syracuse Orangeman.

Fellow Syracuse alum Randy Staats had four points (3G, 1A), and Mark Matthews put up 6 goals.  Atlanta needed all the offensive help they could get, facing the two leading scorers in MLL (before the game), and their stars showed up big time, including newly acquired Matt Mackrides, whose only goal of the game was the biggest, coming at 8:30 of the overtime period, and sent the Kennesaw, Georgia crowd home happy.

With an eight point performance, Kevin Rice climbs ahead of Tom Schreiber and Marcus Holman for the MLL scoring lead.  Both Scotty Rodgers and Adam Ghitelman made 14 saves for the Blaze and Machine respectively, a respectable save total in a game that did not feature much defense. The Blaze improve to 3-4 in their inaugural season, and they will travel to Charlotte to take on the Hounds on June 25 (Lax Sports Net).  As for the Machine, they drop to 6-3, with their next game coming back in Ohio against the Rochester Rattlers.

In what has been a thrilling season in MLL, this game might just be at the top, for now.