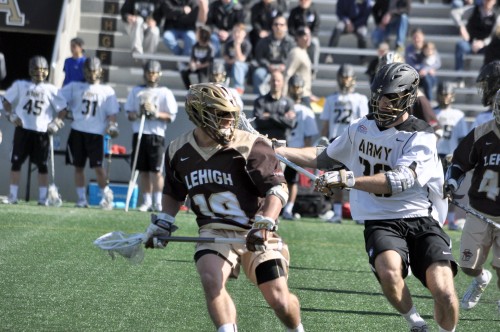 Coming off a hard-fought 13-10 loss at Army West Point, the Lehigh men’s lacrosse team looks to get back on track when the Mountain Hawks head to archrival Lafayette on Saturday. Opening faceoff in Fisher Stadium is set for 1 p.m. Lehigh will be searching for its sixth straight win over Lafayette.

The Mountain Hawks enjoyed a strong first half against the Black Knights, taking a 6-4 lead after 30 minutes of play. Senior Reid Weber led the first-half charge, posting a hat trick before halftime for a second straight game. However, Lehigh struggled in the third quarter, getting outscored 7-2 and trailed 11-8 after three quarters of play. The Mountain Hawks pulled as close as 12-10, but couldn’t complete the comeback.

Along with Weber’s hat trick, classmate Ray Mastroianni recorded his first-career hat trick with three goals. Weber finished the afternoon with three goals and two assists, tallying four or more points for the fifth time in six games this season. One of Weber’s goal was a highlight-reel tally featured by several media outlets, including CBSSports.com, with the title “This could be the lacrosse goal of the year.”

Senior Billy Oppenheimer and junior Matt Raposo also finished with two points, each recording one goal and one assist. Defensively, senior Tripp Telesco had five groundballs and two caused turnovers, classmate Casey Eidenshink scooped four groundballs and freshman Craig Chick had three groundballs and three caused turnovers. Freshman goaltender Chris Kiernan made his collegiate debut over the final 19:05 and made six saves, allowing just three goals, in a strong effort to give the Mountain Hawks a chance down the stretch.

With his four groundballs on Saturday, Eidenshink is now just one from reaching 100 in his career. He would become the second Mountain Hawk to reach the milestone this season, along with Telesco. Several Lehigh players continue to stand among the nation’s leaders in statistical categories as Telesco is third nationally in caused turnovers per game with 2.5 per contest while Chick is sixth with his 2.0 average. Freshman Tristan Rai is seventh in goals per game (3.17), having scored at least one goal in all six games thus far while Rai is also second in shot percentage (.633). As a team, the Mountain Hawks are sixth nationally in scoring offense (13.5), caused turnovers per game (9.17) and shot percentage (.357).

Lehigh stands at 4-2 overall and 2-1 in league play, right in the mix amidst the tightly-bunched Patriot League standings. Boston University, Army West Point and Loyola are all tied for first place at 2-0. Lafayette is 1-4 thus far as the two rivals will meet for the first time since last year’s regular season finale, a thriller which the Mountain Hawks won 11-10 to clinch their fifth straight Patriot League Tournament appearance. Following two straight road games, the Mountain Hawks will return home next Saturday (Mar. 26) to host Navy.

Lafayette is 1-4 this season with a 12-7 win over Wagner and losses to Sacred Heart, Loyola, Army West Point and Penn. Most recently, the Leopards fell at Penn last Tuesday, 12-6. A pair of players spearhead the offense; Eric Joseph leads Lafayette in scoring with 16 points behind 14 goals and two assists while Jason Sands has 15 points behind two goals and a team-leading 13 assists. Next up is Kevin Lewis (six goals) and Connar Dehnert (three goals, three assists) with six points apiece. Michael Joseph and goaltender Ben Falcone are tied for the team lead in groundballs with 17 while a trio of Leopards’ defenders lead the way with seven caused turnovers. Sullivan has taken the majority of faceoffs, winning 42-of-85 (49.4 percent) while Falcone has recorded an 11.68 GAA and .504 save percentage.

Lehigh has beaten Lafayette 14 of its last 15 tries, most recently edging the Leopards in the regular season finale last season, 11-10. Prior to that one-goal win, Lehigh had won the previous four meetings by seven or more goals. The long-time rivals first met in 1926, a 9-0 Lehigh victory. Lehigh won 10 in a row before the first Lafayette win in 1935.

Following Saturday’s game, Lehigh returns home for the next two games, beginning next Saturday vs. Navy at 3 p.m. The Mountain Hawks then welcome No. 13/15 Stony Brook the following Tuesday (Mar. 29) at 7 p.m.