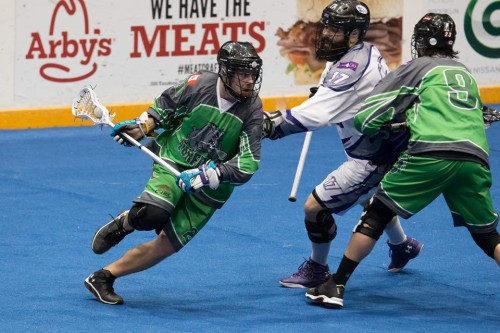 Friday night in Oshawa the Durham Turfdogs and Ohsweken Demons face off against each other at the General Motors Centre in the Creator’s Cup final game to determine the 2016 Canadian Lacrosse League champion.
The Turfdogs are playing for the cup for the first time in the league’s five year history. The Demons are playing in their third straight Creator’s Cup, but lost their previous two attempts to Niagara and Barrie after winning the inaugural trophy in 2012.
Durham and Ohsweken played each other twice in the regular season with each team winning once. Durham finished in second place with a 6-4 record and Ohsweken finished in fourth with a 4-6 record. The Demons beat the first place Niagara Lock Monsters in the semi-finals to secure their place in the championship game.
Durham has the edge for this game on paper, based on their goals for and against in the regular season compared to the Demons. However, as Ohsweken showed in their semi-final, never count them out. They were down 9-7 and won the game 13-9 on the strength of six straight fourth quarter goals from six different players. Vaughn Harris leads the Demons with five playoff points.
The Turfdogs made it to the final with a 13-12 overtime over the defending champion Barrie Blizzard. Goaltender Lukas Coote took charge in goal late in the season and was at his best in the overtime period. Josh Wasson scored the winner after Derek Hopcroft sent it to extra time. Cody McMahon leads the Turfdogs with eight playoff points.
CLax is league where any team can win on any given night and games thus far this season have all been exciting and intense. Expect nothing less, and probably even more, from a championship game. CLax may still be growing its fanbase, but the players are in it 100% and will leave everything they have on the floor for that trophy. Game time is 8:00pm and the game can viewed at www.canadianlacrosse.com for fans from out of town.