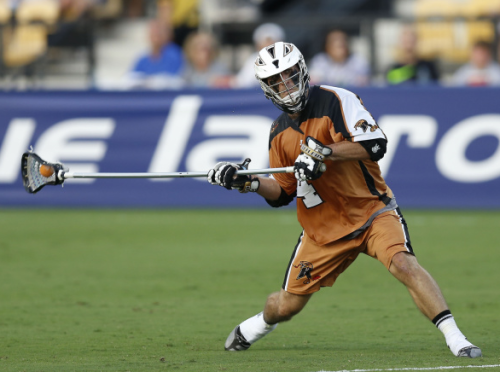 The Rochester Rattlers are back in the MLL post season for the second season in a row. The four teams will do battle tomorrow, August 1st, in semifinal games with each game’s winner to meet next week in the championship game in Kennesaw, Georgia. Rochester is pretty familiar with the site, the runner’s up in the 2014 MLL Championship Game against the Denver Outlaws. While that Rattlers team was dominant, this iteration of the 08’ Champions is much different.

Ending the season with a surprising loss to the Florida Launch, the Rattlers along with the NY Lizards, move into the post-season on a down note. It’s been an up and down season for Rochester, the Rattlers the only team in the playoffs that look they limped and dragged their way through. This is none too surprising given their season. The late start, next to the meshing and development of chemistry at the start of the season showed in their games. Chemistry was noted as the biggest asset the team possessed last year. When they finally looked to return to their form after their dominant 13 – 6 win over the Boston Cannons at home, the Rattlers’ top defensemen, 2014 Defender of the Year Mike Manley, went down, out for the season. The Rattlers chugged on, but were never the same Inconsistencies on defense plagued them for the entire second half of the season.

A Look Inside: Offense

The loss to Florida is evident of this. Rochester started off strong, moving the ball well and finding cutters on the inside for very high percentage goals. However, they quickly became less and less patient and methodical on offense, as the less and less they possessed the ball, the more and more their initiators didn’t initiate and the midfielders went for forced shots. Despite being in the upper half of the league in terms of point production, Rochester’s offense seems the most out of sorts when it comes to playing from behind. Teams, from the Chesapeake Bayhawks to the Ohio Machine, have on more than one occasion solved the problem to Rochester’s offense and Jordan Wolf. The answer was simply not letting them have the ball, and the cohesive execution of that offense withers away.

However, when they command the ball, they’re offense is flying. No better example is needed for their second most dominant win of the season, the second to last game of the season against the Charlotte Hounds at home. In that game, their heavy possession of the ball, despite not winning the vast majority of the face-offs, allowed Rochester to dictate the pace of each possession, which is why they were seemingly everywhere and scoring everything that game. The Boston game along with the loss to Denver at home further showed just how potent this offense actually is, putting up 21 points despite losing the game.
Scoring Leaders

Jordan Wolf was the undisputed biggest threat on the offense this season for the Rattlers. The superstar out of Duke lead the team in both goals and assists this season and sat atop the league’s Top Three in scoring all year long, at several times being the lead leader in points. During the first half of the season, Wolf was barely guardable, as his extraordinary burst towards the right side of GLE made him a matchup nightmare for most defenders in the league. In fact, it was this very move that Wolf has more or less made his own that gave Rochester their starting win in OT over the Hounds to begin the season. With their players having NLL commitments, the Rattler’s offense running through Wolf at the start of the season, and the success it brought them, made it difficult for them to transition into a better, more methodical type of offense once the players all got back, as they were so attack-orientated. When defenses did figure him out however, Wolf went cold, stone cold. There were multiple games were Jordan either failed to score a single point or only managed two total. Like John Galloway at goalie, he was rather hot or cold as the season winded down.

Wolf noticeably had less of an impact on the offense during the second half of the season. Most of it had to do with the problems of the Rochester offense itself, but part of it was product by design, as Dave Lawson and Jordan MacIntosh picked it up. From his pick game on the wings to his off-ball finishing, the Canadian from RIT has been nothing short of spectacular for the Rattlers, finishing up second in scoring on the team despite the limited runs due to NLL time. Some of his off-ball work has come at the works of Dave Lawson. A superb initiator from up-top, Lawson worked best when the Rattlers had him dodging from the middle of the field to pass to either an off-ball player like Jeremy Boltus in the beginning of the season, or a streaking midfielder who would then set up another pass to X like John Ranagan or shoot himself with space, causing opposing defenses to collapse momentarily as each touch was just another pass until the eventual layup goal.

In a word, the offense functions in a very different way than previously seen. Whereas last year’s success was built off of chemistry, this team’s victories had to do more with control. When the Rattlers dictated the pace of the game, the offense was very difficult to either overcome or limit when playing from behind.

A Look Inside: Defense

However, playing from behind was not something Rochester liked to do at all this season. The Rattlers’ defense has been the most shell-shocked out of every team in the playoffs. Sorely missing the presence of Mike Manley on the field, Rochester’s defense had to dig down deep in every game but one throughout the second half of the season. Almost every game was a high scoring affair for the opposing team, whether it was a win or loss. It’s not at all surprising of course, given just how much of an impact he had on the defensive side of the field. With Manley taking on the opposing team’s top player, and John Lade erasing the presence of their second best, Rochester shaved off an extra three or so enemy possessions during the first half of the season.

Despite their talent on offense, Rochester was primarily a defensive team to start the season, and glimpses of it showed throughout the early campaign. However, even early on, the defense was shown to break down when weakened. NY sweeped them 19 – 9 in their first matchup, while Boston later on put up 17 goals to beat them in OT, a game Rochester had under control for the most part. Rochester ended the season winning their last three of four, but two of those wins were by a differential of 2 goals total. Their second win against Chesapeake showed just how broken down the Rattlers can get. In that home game, Rochester limited Chesapeake to just nine goals coming into the final quarter, but then Chesapeake went off on a tear, scoring four goals deep into the 4th to tie the game. Rochester ultimately survived that match off a Kevin Rice goal. Prior to this match, Rochester gave up a huge 22 goals to Denver in the highest combined scoring match of the season, losing 21 – 22 at Denver.

Some of the best looks on defense for the Rattlers were actually in transition. Rochester is known for having one of the league’s top transition offenses, and like Boston, their poles are active from D to O. Joel White had another marvelous year. A combination of superb stick skills with the long pole on top of good defensive plays and marvelous transition has the two-time Syracuse champ continuing to make his run as the successor to Brodie Merrill. Meanwhile, Joe LoCascio is one of the more underrated defensemen in the league. Stepping up big when his team needed him, one of the highlights of Joe’s season was his two point goal against the Outlaws at Denver. Meanwhile, with Mike Manley down, John Lade stepped up to take on the opposing team’s best player, and while met with mixed success, John Lade is a top defender on any other team, and the Eraser responded rather well given the circumstances.

While lacrosse is known to be a game of runs, Coach Soudan commented that the inconsistencies on the defensive side of the field, particularly John Galloway, were due to, surprise surprise, the overall team’s cohesiveness. When they felt confident, and Galloway was locked in, the defense held up.

The best thing going for the Rattlers is that they have made it this far despite being as weakened and battered as they are. Facing an Ohio team they split this season with but lost to in terms of goal differential, (and yes, they’re facing Ohio tomorrow, not the Lizards), Rochester’s best bet is be able to match toe to toe with them on offense. Maximizing each possession, which is sure to be limited thanks to being at a disadvantage at the X, is pivotal if they are going to have any success against Ohio. They also have to make a choice, they either run the pick game they beat them with during their previous game, with the midfield initiating, OR continue with having both rookie Kevin Rice and Jordan Wolf rotating from above or below the cage in order to get them looks on an attack first set up. As Ohio is the second best defense in the league and has a legitimate candidate in Goalie of the Year in Brian Phipps, the former is not only better for Rochester in terms of point production, but better for them to be able to dictate the possession, growing their confidence and making better plays.

Meanwhile, it’s now or never for John Galloway and the defense. No player on the team has been more on and off than the 2014 Goalie of the Year. When he’s having a good game and making good stops, he’s the best goalie in the world, but when the defense doesn’t help, he lets in even the easiest goals. Ohio is going to put in some serious goals of their own, but the defense must do everything they can in order to make it as easy as Galloway as it can be, especially off-ball. Rochester’s defense is notorious for losing their man in the settled six on six, and whether from deep or close in, an opposing player has made a living off of giving Galloway fits with either excellent or even not so excellent shot placement. Meanwhile, groundballs and other extra possessions must be critical. Rochester must lead in groundballs for them to win this game, period. Double-poling the face-offs might be needed in order to limit Puskludjian.

This is the unit that can bring them to the championship game one more time, so John Galloway has to be as locked in as ever if he wants to finish the quest for his next big ring. This is by far the toughest team in the play-offs with what they’ve had to go through on the field to make it as far as they’ve had. I won’t be making any predictions as I went from potential repeat 10 – 4, to possible one game back 9 – 5, to this 8 – 6 record, but the offense will be fine if they initiate first, shoot second, on all fronts. It was their game and their season by almost all accounts last year, but if the Rattlers can reach the championship game one more time, it will be more of a victory than most realize.