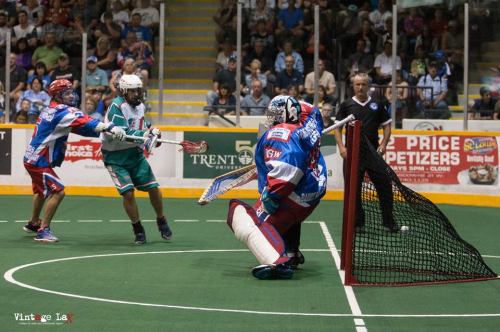 The Peterborough Lakers open the 2015 MSL playoffs this Sunday, hosting the Oakville Rock in game one of the best of seven series.

The Lakers had to wait until the end of their last game, and the regular season, before knowing who their opponents would be. Several scenarios existed, but they knew they would play either Oakville or the Brampton Excelsiors. Oakville not only cliched third place with their win over Brampton Thursday, they also knocked the Brooklin Redmen right out of the playoffs. Brampton will play the first place Six Nations Chiefs. The Kitchener-Waterloo Kodiaks did not make the playoffs.

The Lakers goal is to get to the Mann Cup, and it doesn’t matter which team is standing in their way. They’re already looking forward to the MSL final series.

That said, the team is laden with veterans of the Lakers last two post-season failures, and they’re not going to let their guard down against the Rock.

Shawn Evans is optimistic about the post-season chances for the Lakers.

“We have a good vibe right now.” he said. “The last few games, last couple wins there’s been a good feeling in the dressing room. Everyone’s healthy, we got good news about Mark Steenhuis tonight too, he could be having a nice speedy recovery and we could be having him back shortly so we’re looking forward to that and we’re looking forward to getting going here on Sunday in front of our fans.”

Steenhuis, thought to be lost for the MSL season and potentially the 2016 NLL season, turns out not to have an ACL tear as originally thought. His knee is healing and he is expected to take warmup on Sunday to test it out. Last year’s league leading scorer would be a huge addition to a team that already boasts Evans and Curtis Dickson.

Captain Scott Self is confident the Lakers have corrected any mistakes they were making earlier in the season.

“We’ve practiced the last two home games beforehand,” he revealed. “It’s a new system for a lot of the guys. A lot of us that play in Rochester are familiar with it but we’re trying to get everybody on the same page. I think we’ve done a better job of that the last two weeks, ironing out the little things that we were messing up on.”

Self said it didn’t matter who the Lakers met in the post-season.

“[Oakville is] going to be a scrappier series than Brampton,” he said. “We didn’t have really any bad blood with Brampton, but our games with Oakville were really chippy, all four of them, so I anticipate a pretty hard fought series.

“I’m definitely not disappointed about that at all, not to say that I wanted to play Oakville but playing in Memorial in this amount of heat I can do without.”

“Playoff time’s a different story,” he said. “Every team is going to play their A game and they’re going to be on you and everyone’s going to be ready to play. We just have to be focused, play our game and I know we can handle things.”