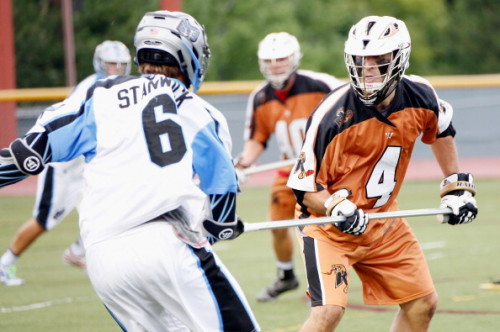 No you take it.

This is a 16 word summary of the contest held at American Legion Memorial Stadium in Charlotte, N.C., on Friday night between the Ohio Machine and Charlotte Hounds, a 14-12 win for the Machine.

The game started well for the home team, as the Hounds (1-7) put home two goals in the first minute courtesy of Mike Chanenchuk and Josh Hawkins.

The tennis match took off from there.

Marcus Holman and Tom Schreiber scored goals 29 seconds apart for the Machine to tie the game at the 8:33 mark of the opening quarter. Goals from Charlotte’s John Haus and Ohio’s Kevin Cooper made the game 3-3 after 15 minutes of play.

After more back and forth action in the second frame, the Hounds took a 9-7 lead into the locker room at halftime thanks to Henry Lobb’s two-point goal with 3.8 seconds left.

Joey Sankey’s goal 3:06 into the third quarter put Charlotte ahead 10-7, but it was all Machine from there.

Ohio, playing without All-Star Peter Baum for the third straight week, battled back as Cooper tallied a powerplay goal with a helper from Kyle Harrison with 7:43 left in the quarter.

The Machine was 1-4 on the powerplay while the Hounds were 2-4 on the evening.

Jimmy Dailey and Kyle Harrison scored for Ohio and the teams entered the fourth quarter tied at 10.

The final fifteen minutes provided the Jake Bernhardt show, as the former Maryland Terrapin had three goals within the first six minutes to give Ohio the lead for good.

Bernhardt’s efforts had him named Coca-Cola Player of the Game.

Sankey powered home his second of the game with 3:34 left to cut the lead to two, but there would be no rally as Shamel Bratton’s two-point goal attempt at the buzzer was stoned by Machine netminder Brian Phipps.

Phipps made 15 saves while his counterpart in Pierce Bassett made 11.

At the faceoff x, the two teams were about as even as it could get. Ohio’s Greg Puskuldjian took 15-28 from Brendan Fowler.

Ohio extends their winning streak to four games and moves into second place in the league standings behind New York. Charlotte is now tied with Florida for last place.