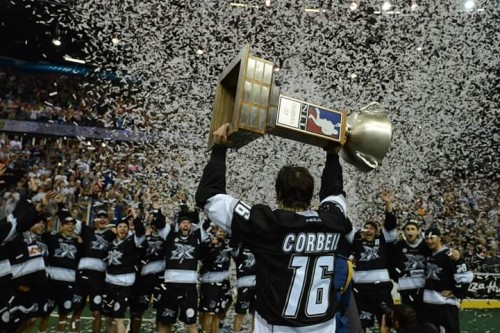 The Edmonton Rush are NLL Champions for the first time in franchise history as they defeated the Toronto Rock in an all-Canadian final 11-10 to sweep the series 2-0 at Edmonton’s Crystal Glass Field at Rexall Place in front of 12,275 fans. The game was a close affair, unlike game one where the Rush dominated the Rock.

It’s been ten years since Edmonton joined the NLL and although they made it to the finals two seasons ago where they lost to Rochester, they were never able to capture the title until tonight and lay claims to the Champions Cup.

It has been a very turbulent season filled with personal challenges starting with the death of coach Derek Keenan’s wife and the diagnosis of breast cancer for star goaltender Aaron Bold’s life partner to the controversial comments made by team owner Bruce Urban during the Champions Cup series regarding the future of the team in Edmonton.

The players managed to put all the off-field issues aside and pull together to become the best defensive and one of the most feared offensive squads throughout the season and ultimately the 2015 NLL Champions Cup winners.

The game was an epic battle of wills. Both teams left everything they had on the field. The Toronto Rock opened the scoring at 4:06 on a goal by Josh Sanderson and worked their way to a 2-1 lead at the end of the first.

The second quarter saw Zack Greer score just 27 seconds in to tie the game at two a piece.  It looked like it would remain tied heading into the half until Edmonton was given possession of the ball with five seconds remaining. On a set play the Rush were able to execute with Mark Matthews scoring his second of the game with a mere .01 seconds on the clock.

It appeared the late goal sparked Edmonton to begin the third quarter when Mathews scored his third of the game to give the Rush their first two-goal lead of the game. Toronto clawed their way back as the teams exchanged goals then saw the Rock score three unanswered goals to regain the lead for Toronto.

It was almost four goals in a row for the Rock had it not been for Derek Keenan throwing the flag for a coaches challenge that saw Toronto get called for a crease violation and keeping the Rush trailing only by one. On the ensuing possession Edmonton scored on a timely goal by Robert Church and suddenly the Rush found themselves tied instead of down by a pair.

The fourth quarter started with Sandy Chapman taking a five minute boarding penalty giving the Rush the opportunity to put the game away, but instead of Edmonton scoring, Rock forward Rob Hellyer

Scored a short-handed goal to give the Toronto the lead.

Finally Edmonton was able to score on the power play when Mark Mathews deposited his fourth goal of the night and once again tying the game. Then Mathews got Edmonton a short-handed goal of their own when Mathews got his fifth of the game on a pass from John Lintz.

Edmonton would take their final lead on a goal by newly acquired via the trade deadline Matthew Dinsdale on setup passes from Mathews and McIntosh. Toronto would pressure the Rush for the final minute but the leagues best defense was able to thwart their efforts and hang on for the all-important victory.

NLL Commissioner George Daniel presented team captain Chris Corbeil with The Champions Cup and the celebrations began as players openly wept with emotion and passed the cup to one another to hoist as they proudly showed it off to fans and family.

The commissioner also commented that the league has faith in Edmonton and hopefully the Rush and the City can strike a deal that will have this powerhouse team playing in the city for years to come.

All the Edmonton Rush fans could not agree more.